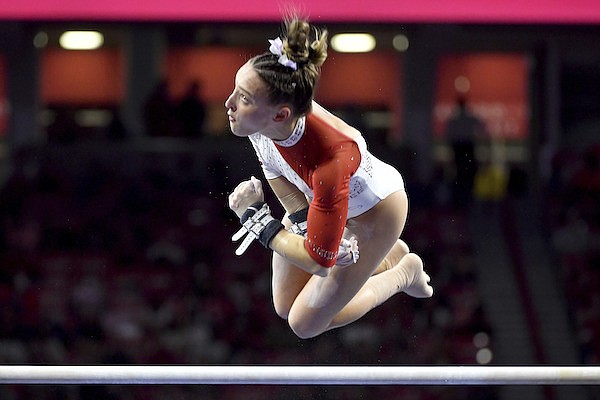 The No. 18 Arkansas Razorbacks continued their late-season surge on Thursday behind senior Kennedy Hambrick and riding a hot start on the uneven bars to a second-place finish in the night session of the NCAA Norman Regional to qualify for Saturday’s regional final in Norman, Okla.

Shaffer helped Arkansas get off to a great start with a career-high 9.95 to place second behind Oklahoma’s Jordan Bowers (9.975) on the bars.

Arkansas posted a season-best 49.45 on the bars with no counting score lower than 9.85. Hambrick and freshman Maddie Jones scored 9.9 on the apparatus, while O’Hara and sophomore Jensen Scalzo posted 9.85s.

The Razorbacks dipped to 49.075 on their strongest event, the balance beam, with Hambrick’s 9.875 leading the way.

Arkansas rebounded on the floor exercise, topped by Lovett’s 9.925, which was good for a tie for second place behind Bowers (9.95). Hambrick and Jones again tied with 9.9s, Savannah Pennese added a 9.85 and Shaffer came in with a 9.8.

The Razorbacks entered the final rotation with a 0.35 lead over Arizona and held the Wildcats off despite putting on five gymnasts on the vault. Hambrick’s 9.9 tied for third on the event.