Goforth stepping away from basketball with stomach condition 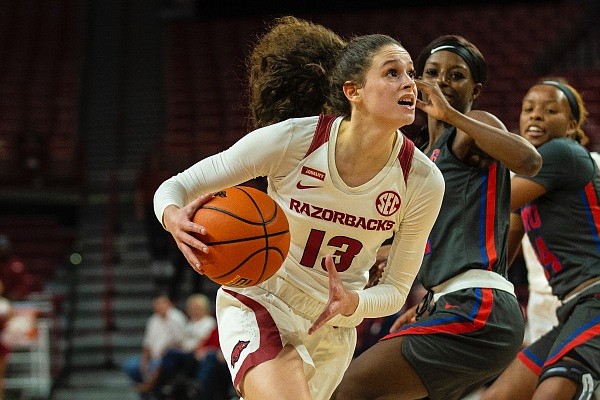 Arkansas sophomore Sasha Goforth drives to the basket against SMU on Monday, Nov. 22, 2021, during the first half of play at Bud Walton Arena in Fayetteville.

University of Arkansas sophomore Sasha Goforth announced via Twitter on Saturday evening that she will be stepping away from basketball to deal with health issues.

The 6-1 Fayetteville native revealed that she’s dealt with a stomach condition called gastroparesis since her junior year of high school.

“This past year, with the combination of Gastroparesis and anxiety, basketball became too much,” Goforth tweeted. “The side effects affected my performance and kept me feeling miserable.

“Although this is incredibly hard for me, I know that the best thing for me to do right now is to step away from basketball.”

Goforth just completed her first season for the Razorbacks after transferring from Oregon State. She started all 32 games and averaged 11.5 points, 4.8 rebounds, a team-high 2.1 blocked shots and 1.4 assists per game. The blocks were the third-best single-season mark in school history and helped the Razorbacks to their second consecutive NCAA Tournament appearance.

It’s the first time Arkansas has gone to the NCAA Tournament in back-to-back seasons since 2002-03.

Goforth hit a three-pointer with 43 seconds left that proved to be the difference in a 66-62 victory over Jackson State on Dec. 9. Her three wiped out a 62-61 deficit and gave the Razorbacks the lead for good. She posted a double-double with 11 points and 10 rebounds in the victory.

She had a strong freshman season at Oregon State, where she averaged 11.6 points and 3.6 rebounds to earn All-Pac-12 Freshman honors.

Arkansas Coach Mike Neighbors said everyone connected with the program will support Goforth.

“Our entire Razorback family is here for Sasha and always will be,” Neighbors said.

Goforth also thanked Neighbors, players and staff for their support and the chance to return to her hometown to play.

“This year I was blessed enough to get the chance to a part of an amazing program with some amazing people in it,” Goforth said. “I can’t begin to describe how thankful I am that Coach Neighbors and the rest of the Arkansas staff was gracious enough to let me come back this year and be a part of this team.

“The team and coaches supported me in in every way possible while going through this and I really want to thank them for that. Basketball has been who I am ever since I can remember. I never thought I would be in this position now, but all I can say is how grateful I am for everything that basketball has brought me. The lessons, the friendships, mentors and so much more are all things that will be with me forever."