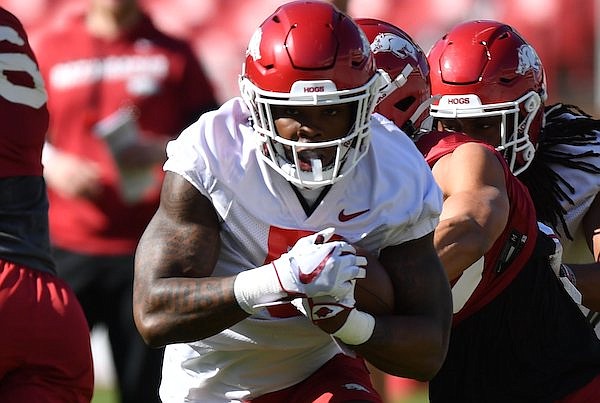 FAYETTEVILLE — Walk-on Dennis Daniels hit a nice seam over the right side, sped through it and bolted into the secondary for a long gain during a team period in Thursday’s practice inside the Walker Pavilion at the University of Arkansas.

Running backs coach Jimmy Smith jumped in the air, hooted in celebration and trailed Daniels down the turf field celebrating, encouraging Daniels to get ready for his next rep.

That’s just par for the course in the high-energy running back room for the Arkansas Razorbacks, who brought back a big corps of proven backs and added to their ranks with early enrollees over the winter.

Other than the bonus-year senior Smith entering the transfer portal and winding up at TCU, the Razorbacks brought back that entire crew, plus highly regarded sophomore AJ Green (227 rushing yards) and backup quarterback Malik Hornsby (136).

Those retention numbers seem extraordinary in today’s game, when players often program hop when they aren’t starting. The group, which includes redshirt freshman Javion Hunt, has been joined in spring ball by signees Rashod Dubinion and Little Rock Parkview’s James Jointer, plus Daniels, a Warren High product who transferred in from Southern Arkansas University.

“That’s Jimmy,” Arkansas Coach Sam Pittman said when asked about keeping all the backs with big credentials. “That’s Coach Smith. I mean, it’s hard to have Rocket and AJ and now Dubinion and Dominique Johnson and keep them all, and they’re all not mopey and walking around like that. That’s all Jimmy Smith doing that.”

The Razorbacks had a closed scrimmage on Saturday but sources said Dubinion, a 5-10, 185-pounder from Cedar Grove High in Ellenwood, Ga., where Smith was the head coach before joining the college ranks at Georgia State, had several strong runs, particularly in the red zone. Sanders and Green also scored during low red zone work, the sources said.

Additionally, Hornsby had a big scrimmage with a touchdown pass covering about 60 yards to Ketron Jackson and a keeper on the read option that would have gone for about a 70-yard touchdown. Hornsby, who has taken reps at receiver to smashing success, was guaranteed work with the first offensive unit on Saturday in his competition with Jefferson.

Sanders and Green have taken the most reps with the starting offense during spring drills as Johnson, who started six games to Smith’s seven last year, recovers from winter surgery.

Green, who held his first media session last Tuesday since his arrival, said the backs can’t worry about the depth chart.

“Honestly, I haven’t been thinking too much about how we’re going to be lining up and stuff, like our depth chart and stuff, because I know our room right now is pretty stacked,” Green said. “We’ve got a lot of people that can go out there and play and run.

“We’re all just ready for whenever we get our opportunity on game day, no matter where we’re at on the depth chart. So honestly, we’re just all ready to compete and that’s what we’re doing right now.

“That’s what we’re going to be doing when the season’s here. I’m not really too worried about that right now because I know we’re going to have success in the backfield either way.”

Sanders is coming off a big performance in the Razorbacks’ 24-10 win over Penn State in the Outback Bowl, just a couple of hours away from his home town in Rockledge, Fla. The 6-2, 221-pounder rushed for 79 yards and 2 touchdowns as the Razorbacks pulled away in the second half.

He has run the most with the starters, though he wore a green no-contact jersey early last week after taking a helmet-to-helmet hit from Jayden Johnson prior to spring break.

Sanders said he’s seeing things from a different perspective with the first group.

“Just seeing from last year playing second and third string that actually helped me to become a one and see better things,” Sanders said. “Being a one I feel like is a big role. I feel like just that right there made me want to be a leader. Not just for the running back room, but everybody else as well.”

Sanders spoke like a leader when asked how Dubinion and Jointer are progressing.

“They came in the room and were ready to learn,” he said. “Both of them definitely, but James coming in as [big] back, and I’m a big back as well, the key thing with him is me telling him to finish runs.

Green and Sanders came in with Hunt in a highly touted group of backs. They talk as if team accomplishments outweigh individual goals, as evidenced by Sanders discussing Green last week.

“With AJ, I just I just like everything he does,” Sanders said. “His hustle on and off the field with him, it just makes me make me want to go hard. That’s with the workouts and practice.

“He doesn’t say anything, he just keeps going on. I feel like having somebody by your side that’s working hard makes you want to do things as well.”

When Johnson returns, the Razorbacks will be as stacked as ever at tailback, with Smith working to push the group to bigger heights.

“You know, he’s in there but he’s not carrying it. That’s Jimmy doing a good job with them, and I think the greatest thing we have in that room is competition, including Dubinion now that he’s come in. I really like him. I think he’s going to be a really good player for us.”

The Razorbacks will return to the practice field Tuesday for spring workout No. 7. The team will conduct an open scrimmage at Reynolds Razorback Stadium on April 16 that will serve as the annual Red-White game.

RUNNING BACKS AT A GLANCE

Analysis: Perhaps the deepest position on the team, it’s hard to imagine a more productive returning group around the SEC. Johnson was dinged up late in the year after surpassing Smith for the starting job. The big back averaged an impressive 5.9 yards per carry. Sanders (5.1) assumed a bigger role in the last few games and is working the starters in spring as Johnson rehabs. Green (4.8) has great speed and big-play potential as well. Like Green, Hunt also came from Oklahoma with strong credentials. Dubinion and Jointer are down the depth chart but appear to have good days ahead.