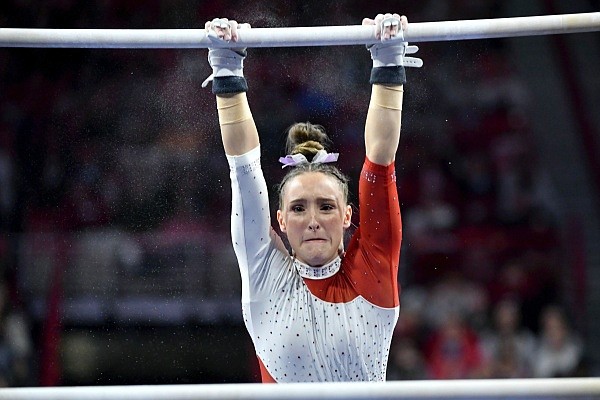 University of Arkansas seniors Kennedy Hambrick and Sarah Shaffer qualified as individuals for the NCAA gymnastics championships based on their performances at the NCAA Norman (Okla.) Regional.

Hambrick’s 39.575 score in the all-around competition in the regional semifinal and Shaffer’s career-high tying 9.95 on the uneven bars were qualifying marks.

Both gymnasts will compete in session I of the championships on April 14 at Dickies Arena in Fort Worth, Texas. Hambrick will rotate with Utah, starting her competition on the floor exercise, and Shaffer will be up after Alabama on the bars in the meet’s first rotation.

Individual titles and the all-around crown will be awarded after the second session on April 14.

Hambrick and Shaffer will both be making their second appearances at the NCAAs. Hambrick, of Pearland, Texas, competed as an individual all-arounder at last year’s championships, while Shaffer of Tyler, Texas, competed with the Razorbacks in the 2018 NCAAs.

Shaffer is a bonus-year senior whose eligibility will expire after the championships. Hambrick, who has an extra year of eligibility remaining if she chooses, has not announced her intentions for the 2023 season.