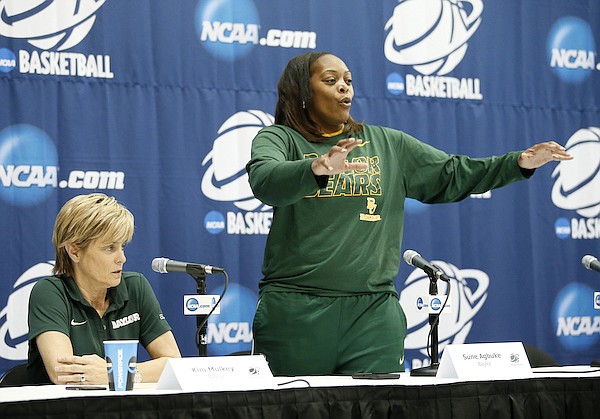 Baylor head coach Kim Mulkey, left, watches as assistant coach Sytia Messer, right, gestures the "Woo Pig Sooie" that Messer would finish off as the "Sic 'Em Bears" call, during a news conference for the second round of the NCAA women's college basketball tournament Saturday, March 21, 2015, in Waco, Texas. Messer, a former Arkansas player that helped lead her team to the Final Four in 1998, was preparing to coach Baylor against Arkansas in the second round of the NCAA Tournament. (AP Photo/Tony Gutierrez)

Messer spent last season as an associate head coach to Kim Mulkey at LSU. She was also an assistant to Mulkey for seven seasons at Baylor and was part of the Bears’ national championship team in 2019.

UCF is the second head coaching opportunity for Messer, who went 54-41 during three seasons at Tennessee Tech from 2009-12. She replaces Katie Abrahamson-Henderson, who left for the head coaching job at Georgia.

According to the Orlando-Sentinel, Messer received a five-year contract at UCF that begins at $625,000 annually. The Knights recently completed a 26-4 season with a 52-47 loss to Connecticut in the second round of the NCAA Tournament.

Messer, a native of Waldo in Southwest Arkansas, lettered four seasons for the Razorbacks between 1995-99 and played in 128 consecutive games — a program record at the time. Messer’s 1,379 career points rank 15th all-time at Arkansas.

She was a captain on the Razorbacks’ team that played in the 1998 Final Four and the 1999 team that won the WNIT. In 1998, Messer was the NCAA West Regional’s most outstanding player after she scored 23 points in a Sweet 16 victory over Kansas and 20 points in the Elite Eight victory over Duke.

Messer was inducted into the UA Sports Hall of Honor in 2018.