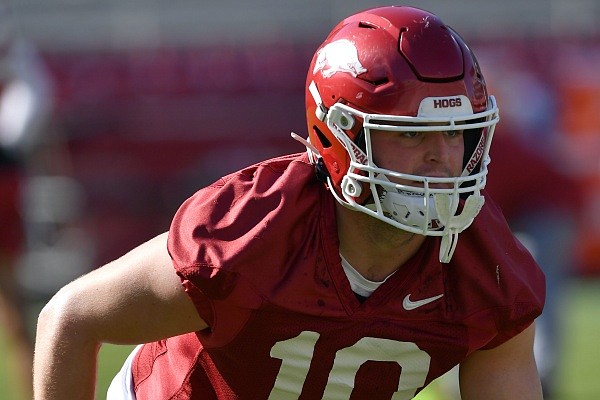 Arkansas practiced inside Razorback Stadium on Tuesday. Here are some notes from the hour I took in:

• Players in green jerseys: Jalen Catalon, Jadon Haselwood. Rocket Sanders was out of the green top he wore last week.

Trey Knox, Pooh Paul, Terry Wells, Zach Zimos and Landon Jackson were present but not in pads. Did not see Dalton Wagner. Sam Pittman said Tuesday evening that Paul got a concussion in Saturday's scrimmage.

Dominique Johnson did not practice again. Pittman said he is likely done for the spring and will be able to do cutting-type work by early summer.

• Arkansas signee Isaiah Sategna watched practice today. Several players came up and talked to him. He decided not to go through spring ball so he could compete in track at Fayetteville High.

• Deke Adams is intense and his voice truly carries. He’s demanding and guys respond well to his messages. He huddled the defensive line together once after what he likely considered an unfocused sequence.

“If you want to be great, guys, you’ve got to put the work in,” he yelled.

Sounds like a standard line, but the tone he delivered it in was just different. It resonated.

• Linebackers and running backs went head-to-head in a pass rush/pass pro drill. Rocket vs. Bumper Pool was a good matchup. Pittman set aside time after reps by tailbacks AJ Green and Rashod Dubinion to talk with them. Very intentional, technique-centric conversations.

• The best catch I saw today came from Haselwood. Matched 1-on-1 against Anthony Brown, he made a one-handed grab in which he contorted his body toward the sideline. Malik Hornsby threw the pass.

Jaedon Wilson also caught a deep ball for what would’ve been a score from Hornsby.

• Pittman said Hornsby did not play any receiver in last Saturday’s scrimmage. He has been working there in practices. Pittman added Hornsby had his best day at quarterback over the weekend.

• Attention to detail in special teams is evident. There was a period with 4-5 different groups working on various aspects of it, from gunners crowding yet giving returners space to catch all the way down to shield work.

• In some team work, Dubinion had a pair of nice carries that drew oohs and ahs from teammates. After the second run, I turned to Clay to ask what he thought of the runs. “He reads with his eyes.” Pittman spoke highly of Dubinion in his press conference after practice.

Here is what I could come up with for the defense. Players listed with AND shared the field with a particular team at the same position:

Here is a breakdown of the offense. Players listed as an OR shared reps with a particular team: