Bogle remembered as one of Razorbacks' pillars 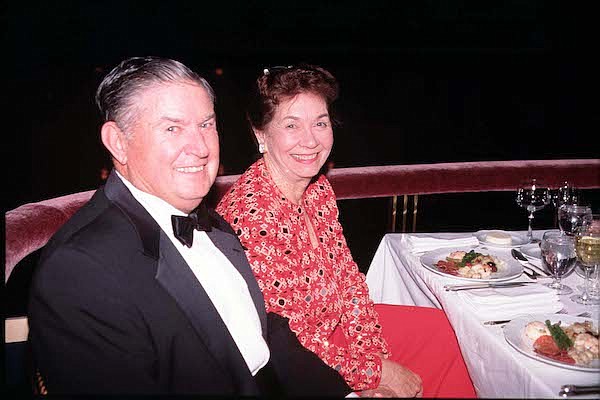 Bob and Marilyn Bogle are shown in a 1999 file photo.

FAYETTEVILLE — Past and present University of Arkansas leaders remembered Bob Bogle this week as an integral piece to the Razorbacks’ efforts of the past several decades.

Bogle, who was one of Walmart’s earliest leaders and a well-known philanthropist, died March 24 at the age of 95.

Along with his wife Marilyn, Bob Bogle contributed millions of dollars to UA academics and athletics projects, most notably Bogle Park, the Razorbacks’ softball stadium that opened in 2009. The Bogles gave an undisclosed lead gift toward construction of the $8.5 million stadium.

A moment of silence was observed for Bogle prior to the Razorbacks' home softball game against LSU on March 27.

“We are saddened by the loss of one of our most avid Razorback supporters," UA athletics director Hunter Yurachek said in a statement Monday. "Bob and Marilyn’s steadfast commitment to the University of Arkansas and Razorback student-athletes created an immeasurable impact on thousands of lives, and we are eternally grateful for Bob’s pioneering support of our program.”

A bronze plaque bearing the Bogles' likeness is located on the north side of the football stadium. They received the UA Sports Hall of Honor distinguished service award in 1996.

“They literally have helped build the program from the ground up,” Varady said this week.

Varady said most of the Razorbacks’ new stadiums or renovations in at least the last 25 to 30 years included significant financial support from the Bogles and their children. Bogle's son and two daughters live in Northwest Arkansas.

“Literally everywhere you turn, their fingerprints are there in terms of support,” Varady said.

According to his obituary, Bob Bogle graduated from UA in 1949 and moved to Augusta in eastern Arkansas, where he met his wife. One of their first dates was to a Razorbacks football game at War Memorial Stadium in Little Rock not long after it opened.

After Bob Bogle graduated from the University of North Carolina with a master’s degree, he moved with his wife to Bentonville. In 1955, Sam Walton convinced Bob Bogle — then a health inspector — to manage his Five and Dime store on the downtown square.

According to Bogle’s obituary, he later suggested to Walton that he rename his growing chain of stores to “Wal-Mart” and that Walton “glanced at it and put it in his pocket. Bob did not know if he would use the name until he saw the letters going up on the first store in Rogers” some time later.

After a 28-year career with Walmart and the Arkansas National Guard, Bogle retired from both roles in 1982. He retired with the rank of colonel in the National Guard.

“He was a very kind man,” Varady said. “I enjoyed hearing his stories about the early days of Walmart. I know he loved his family dearly and he was quite the gentleman, always proper and appropriate. He was very welcoming.”

The Bogles donated toward many projects in Northwest Arkansas in the decades after his retirement. They endowed academic funds and scholarships at the UA, which included a $1 million endowment for a Bumpers College innovation fund in 2013. Most of their donations were for anonymous amounts.

“He was a person guided by the idea that he could lift others up, and he and Marilyn did just that," UA interim chancellor Charles Robinson said in a statement. "Their kindness and generosity opened countless doors for our students and made remarkable things possible at the University of Arkansas. We are endlessly grateful.”

The Bogles donated toward many sports and projects for the Razorbacks, but their passion was to help women’s sports on campus. When Arkansas’ men’s and women’s athletics departments were operated separately, the Bogles helped launch and support the annual Red Tie Gala that raised funds for women’s sports.

In addition to the softball stadium, the Bogles gave a lead donation toward the construction of the Bev Lewis Center for Women’s Athletics in 2002. The Bogles contributed nearly half of the $5.5 million cost for the facility, according to reports at the time, but they declined when it was suggested the building be named after them.

They surprised Lewis, the long-time UA women’s athletics director, when they attended a UA Board of Trustees meeting and suggested her name be put on the building instead.

“That was very, very generous and nice of them,” Lewis said.

The Lewis Center was built as a training center for all female athletes, but it was particularly beneficial to the gymnastics program that launched for the 2003 season. A 15,000-sqaure-foot gymnastics practice area is located inside the building.

Lewis said the Bogles helped her recruit the program’s first coaches, husband and wife Mark and Rene Cook from Stanford.

“They went out to dinner with me and my husband, and Mark and Rene,” Lewis said. “They tried to help sell the recruiting pitch with me. Obviously we had to have a facility, so they were a big, big help when it came time for that.”

Lewis said it took a lot of convincing for the couple to agree to have Bogle Park named after them.

“They didn’t necessarily want to do it,” Lewis said. “I remember talking to the kids and I finally came back and said, ‘What if we put the family name on it — not just your name, but we name it Bogle Park?’ I said, ‘You have a Bogle Park in Bentonville, so you might as well have one in Fayetteville.’

“I think the children talked to them…and said we ought to let them do that if they want to give us some recognition on campus. But it wasn’t anything they were looking for. They preferred to work behind the scenes. Throughout Northwest Arkansas, there are lots of organizations and the church and the community that they have been instrumental in helping.”