Fayetteville was step toward world of glory for Gay 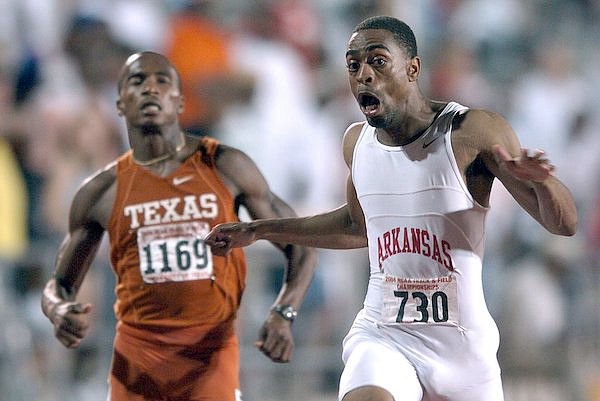 Arkansas' Tyson Gay reacts as he crosses the finish line with a time of 10.06 to win the NCAA men's 100-meter dash during the NCAA Outdoor Track & Field Championships on Friday, June 11, 2004, in Austin, Texas.

FAYETTEVILLE — Tyson Gay is enjoying the good life in Winter Garden, Fla., after retiring from his track career in 2017 as the American record-holder in the 100 meters.

“I’m pretty domesticated, I need to lose 15 or 20 pounds,” Gay said with a laugh. “I pick up my son [Tyson Jr.] from school every day and watch him play baseball and sometimes we go fishing.

Gay, who in 2004 became the first University of Arkansas athlete to win the 100 meters at the NCAA Championships when he ran 10.04 seconds, will be in Little Rock later this week to be inducted into the Arkansas Sports Hall of Fame. The induction banquet is Friday night at the Statehouse Convention Center.

“It’s definitely an honor to be inducted into the hall of fame that has had so many great athletes like the state of Arkansas,” said Gay, a native of Lexington, Ky. “It was kind of a shock when I first got the news, because it came out of nowhere.

In 2009 Gay equaled his record by running 9.77 again, then broke it with a 9.71 at the World Championships in Berlin, finishing second to Jamaica’s Usain Bolt and his world-record time of 9.58.

A month after the World Championships, Gay set the American record again with a 9.69 he ran in Shanghai on Sept. 20, 2009.

Nearly 13 years later, Gay’s time remains the fastest 100 ever run by an American.

“The technology and science of sprinting has gotten better to help with training methods from 2009 to now,” Gay said. “The tracks are faster, the spikes are faster.

“The spikes I ran in are nothing compared to what guys are running in now. I’ve seen guys getting on machines and testing how much power they have and they know exactly what their heart rate is for every stride they take.

“Back when I ran, we just got our butts out to the track and sweated and worked hard and went home. It’s a lot different now, so I feel good to still hold the record.”

Gay said he believes there are several top U.S. sprinters who are capable of breaking his record, including Trayvon Bromell, Marvin Bracy, Christian Coleman and Ronnie Baker.

“Someone asked me recently if I’d be sad to see my record broken, and truthfully, I wouldn’t be upset,” Gay said. “Having the record as long as I have has been a blessing.”

“It’s not easy winning three events, I don’t care if it’s high school or college or as a pro,” Gay said. “So to do it at the World Championships meant a lot.”

Artie Huff, a distance runner at Arkansas in the 1990s, works for Global Athletics & Marketing Management Company and has been instrumental in helping guide Gay’s career and manage his finances.

“When Tyson signed his first professional contract, I showed him the simple strategy of investing and compounding your money,” Huff said. “He followed the plan.

“He’s not working anymore, but he doesn’t have to work because he’s taken care of his money.”

Gay said Huff helped teach him about having a lengthy and productive pro career.

“I had a mature approach to it — you’re a professional, so it’s a job,” Gay said. “I’m going to have fun, but I’m going to take it seriously. I’m going to make as much money as I can and save it, so that when I’m done, I can enjoy life.”

“Tyson was always working to become better,” Huff said. “Always trying to be the best he could be on the track. Not just on the weekends — we’re talking every day. His work ethic was unbelievable.

“When Tyson raced, it wasn’t, ‘Let’s open up this weekend and see how we do.’ When Tyson got on the track, he was going to run fast. So he was always ready to perform.”

Gay’s best shot at an Olympic medal likely was in 2008, but a hamstring injury suffered at the U.S. Trials curtailed his training. He didn’t make the final of the 100 at the Olympics.

“I didn’t feel like I was hurt, but my hamstring felt funny before the 200,” Gay said. “When I look back on it, I shouldn’t have even got in the blocks for the 200, but having so much pride, I told myself I could do it.

“With my competitive nature, there was no way I wasn’t going to try to run in the 200 as well.”

Gay suffered personal tragedy away from the track when his daughter, Trinity, was killed in 2016 at the age 15. She was an innocent bystander caught in the crossfire and shot in a restaurant parking lot in Lexington.

“My daughter was a big part of my motivation when it came to running,” Gay said. “I knew I had to take care of her.

“Losing her was tough. I was numb for a few years, but then I tried to understand that I couldn’t keep being depressed. I had to shake out of it, and my son helped me do that.

“Now I just try to live my life the best way I can and think about all the happy times I had with my daughter. Hold onto those memories.”

Gay said he didn’t run track until he was 14 years old and in the eighth grade. He was inspired by his older sister, Tiffany, who was a sprinter, and also got encouragement from a teacher.

“My music teacher was also the track coach,” Gay said. “I was running down the hallway, and he said, ‘If you can run that fast, you need to come out for the track team.’ ”

“My time at Arkansas was great,” said Gay, who ran for the Razorbacks for two years. “Being in Fayetteville reminded me of Lexington — a college town where you could really focus on your sport.”

Gay trained at Arkansas with Wallace Spearmon Jr., a Fayetteville High School star and two-time NCAA champion in the 200. Spearmon earned four medals at the World Championships — including gold running on the 400 relay in 2007 with Gay — and was an Olympian in 2008 and 2012.

“I loved the fact that Wallace would push me in training,” Gay said. “But I hated the fact he could sometimes kick my butt.

“We were both talented and either one of us could beat the other on any given day. We had a real competitive edge in training and helped make each other better.

“There was a lot of ego involved when we trained, because we were the two best sprinters on the team. He wanted to win, and I wanted to win, too. We had a fun rivalry, but it was all in love.”

TYSON GAY AT A GLANCE