State of the Hogs: ESPN’s Branch high on Musselman 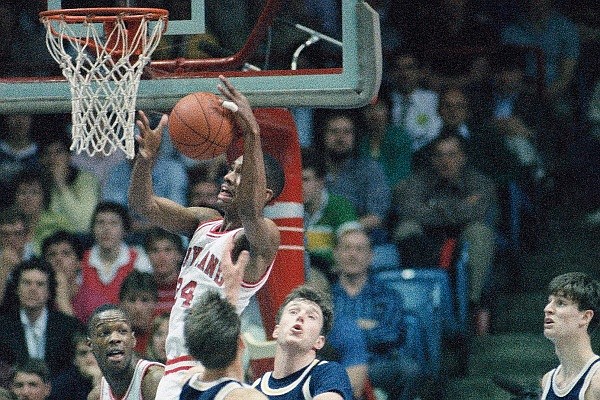 Always under promise, over deliver. So many do the opposite.

I took the microphone to emcee the Hawgs Illustrated Sports Club program Wednesday with confidence that the keynote speaker was about to over deliver.

An online study of ESPN basketball analyst Adrian Branch left me in awe. It said he’s delivered his testimony — with a rich basketball legacy — to over 2 million and never was anyone disappointed.

Branch, a complete stranger, all but hugged me when I met him before lunch. I mentioned the 2 million number — full high school auditoriums or small FCA groups — and there was a grin. When done speaking, he was praying for me as we headed to the door.

As soon as he begins, you listen. You scoot forward in your chair, not because he’s unclear or lacks strength in his voice but because you want to breath in his message, know his story and tell it to anyone you meet for the next week.

It’s delightful to say I’m in his 3 million. I learned a lot. I’ll never forget, “You’re not born a winner or a loser, you’re born a chooser. Choose wisely.” It’s his way of emphasizing that decisions have consequences.

Branch told the story of his Maryland Terps teammate, the late Len Bias. He died of cocaine overdose just two days after the Boston Celtics made him the No. 2 overall pick in the NBA Draft.

The story was illustrated with power by pulling some Lincoln High School softball stars from their seats to make the characters in the story come to life for wrong choices that were costly. It was dramatic and proved compelling. He included some of his poor choices.

There was a beautiful message about Arkansas basketball. Branch opened his message with a bold prediction: Eric Musselman will win an NCAA basketball title for the Razorbacks. He thinks it will be sooner rather than later.

“First, I know him,” Branch said. “He’s already made my first prediction about his Arkansas time come true. I said the day he was hired: Eric Musselman will have Arkansas in the Elite Eight within four years and maybe in the Final Four.

“Yes, he’s done (Elite Eight trips) twice before the four years are up. Here’s my next prediction: He’s going to win the championship right here. You have a great coach now, a great coach.

“I should know. I’ve been coached by a Musselman.”

Branch played for Bill Musselman, Eric’s father, with the Minnesota Timberwolves in 1989. That was after Branch got a championship ring as a rookie with the Los Angeles Lakers in 1987.

Branch was part of the great Maryland teams coached by Lefty Driesell. He finished his UM career in 1985, one year ahead of Bias.

There were stories about run-ins with coaches as a high school star at DeMatha Catholic in Hyattsville, Md., just a few blocks from the Maryland campus. Legendary DeMatha coach Morgan Wooten and Driesell both suspended Branch from the team for attitude problems, something he detailed in his message.

Wearing a ball cap sideways can be a sign of a bad attitude. He’s not a fan of baggy britches, either.

Eventually, Branch got his act together, but not before general manager Jerry West cut him from the Lakers after one year.

“I was a scorer,” Branch said. “He decided I should become a defensive stopper. He said I had the worst warm-up routine in pro basketball history. I tried shots from behind the goal. The rest of the team practiced shots they would take in the game.

“So after my first year, he told me he wanted me to become like Michael Cooper, the NBA’s best defender. I said, ‘Not me, I’m a scorer.’ And I went to the summer league and set a one-game record with 55 points.”

That’s not what West had in mind and he was gone. The message was clear: Listen to your coaches, or your bosses. Give them what they want.

No question, the 6-8 Branch could deliver highlights. He earned MVP honors in the McDonald’s All-American Game — over Michael Jordan. He won lots of slam-dunk contests.

But what he does on the FCA speaking circuit — and what he did in Fayetteville and Fort Smith on back-to-back days — is more impressive than his best dunks.

The Terps won the ACC title with Branch as the leading scorer in 1984. He was honored as an ACC Legend at the 2004 conference tournament.

Branch said he was anything but a legend as he starred for the Terps. He mentioned his poor attitude as a reason he wasn’t drafted until the second round, the 46th overall pick.

“Jerry West told me when I got to the Lakers that my attitude dropped my draft status,” Branch said.

“A bad attitude and lack of gratitude will slow your altitude and stump your aptitude,” he said. “A positive attitude is everything to me.”

He didn’t make the squad when the Chicago Bulls drafted him in 1985. The Lakers picked him up after two years in a developmental league.

Branch loves metaphors. There are catchphrases in his standard speech about turning your hat around, then turning your life around.

Basically, you never know who might be watching you. There may be an NBA general manager in the stands.