Finishing with one more 13 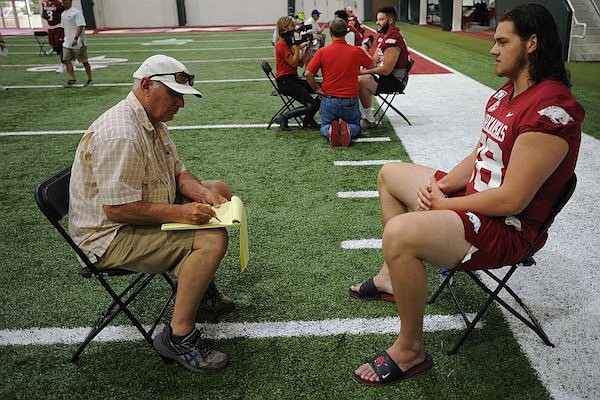 Arkansas offensive lineman Dalton Wagner (right) is interviewed Saturday, Aug. 3, 2019, by Clay Henry of Hawgs Illustrated during Media Day inside the Willard and Pat Walker Pavilion on the university campus in Fayetteville.

Obviously, I don’t fret about anything that happens on what some think is an ominous day. I see 13 as good luck. And for 30 years I've been lucky.

Our first cover was Jason Allen in full gear. Of course, Allen wore No. 13. I trot out Jason’s name in most speeches as a great trivia question.

This Wednesday will be my last April 13th at Hawgs Illustrated. My resignation as publisher and editor was accepted Friday night. I’m at work on one last magazine, Volume 31, Issue 6.

I’ve known for weeks — probably months — that it was time to step aside. It’s called burn out.

Many don’t know that I tried to step aside almost four years ago when Jean Ann and I made the decision to move from Fayetteville to a new home near the Norfork River in Baxter County.

That turned all 12 football games into road games. I’m two hours, 45 minutes from campus. I have done that drive too many times. Often I’ve made it twice a week. Gas prices keep going up. I ask myself why am I doing this every time I stop in Harrison for gas and coffee.

I never thought I’d do four years of putting together magazines from a remote location and go to every football game. I’ve about worn out a really nice pickup truck.

There are no airports close to Norfork. By the time you drive three hours to Little Rock or the XNA airport in Highfill, you might as well be east of Memphis on your drive to the game.

I’ve actually loved most of it. I play my George Strait tunes over and over — about 70 of them — rolling down the highway. There is no one in the truck to tell me to turn it down.

I was singing along this past fall with the music turned up on the way back from Baton Rouge. It was well past midnight when an SUV next to me filled with Razorback fans honked and cheered as we waited for a stoplight to change in Visalia, La. Well, they were cheering the Razorback victory but they did recognize me and knew I was singing with King George.

So this is confirmation that this football season was fun. Writing about 9-4 is more fun than writing about 2-10. But I also knew it was going to be my last doing magazines. I knew it was just too hard for an old guy.

It’s tough work. It’s a grind. There are no days off doing 11 magazines in 12 weeks. I could do it in my sleep after all these years, but that’s not the point. I knew while trying to go to sleep that it was “time” to stop.

It’s OK if you love it. And I loved it for 29 years. It was my pride and joy, my baby. It was just not quite the same this year.

I am always worn out at the end of football season. I get a little better in December. I’m starting to fire on all cylinders in January. Duck camp with college buddies does wonders. I know in February that I’m bouncing back. March hits and I’m excited again. Boom, I’m good to work hard again.

It didn’t happen this March. I told Brent Powers almost one month ago that I was done. I tried to resign. He did what a good boss does. He tried several weeks to talk me off the ledge. He is a good boss, too. It dawned on me last week that I had not put it in writing, so I did. I’m in the middle of my last two weeks.

Powers is president of the Northwest Arkansas Democrat-Gazette. Hawgs Illustrated is a division under his supervision. He is my only direct report. He’s been supportive.

For a while we talked about my future as if I had not resigned. I listened for several weeks. There were great options that would be easier for me. He said subscriptions are way up. Winning always helps. I’d have more in budget to do cool stuff.

Ultimately, that was wrong. For the magazine to flourish, I need to step away. I am well paid. I felt that money would be better served to find new talent.

I’ll stay in touch. I’ll write an undated column for every magazine, 20 per year. But I won’t cover games or anything else.

That doesn’t mean I’ll stay away from games. But I think I’ll enjoy taking Jean Ann’s hand and walking her into the stadium. I see that as I carry my satchel outside the stadium, a guy holding his girl’s hand.

Jean Ann has been my girl for the last 45 years, 43 of them as a happily married couple. She has supported my career and known what working late means.

I’ve never walked her — or anybody — into a football stadium. I started working in the press box for my father at age 16.

Powers made me some interesting offers. He knows me well. My passion isn’t so much producing magazines, but storytelling. Would I also consider some freelance columns on hunting and fishing? Now that’s something interesting. They are going to pay me to fish or subsidize a trip out West?

So what I’ll do is going to be fun. I’ll be on my time and I’ve got to make sure that I don’t turn retirement into too many jobs. I could burn out again.

It will be catching up with Razorback legends and updating their stories. I’ll write another column this week as my last duty on the job to thank a long list of people who have helped me do a fun job.

I’m sure I can also fill a request for reports from the duck woods, or how Louis Campbell and I did on the White River. That’s not work, but I’ll take the pay. It will buy new fly rods that I probably can’t afford now that I’ll be unemployed. 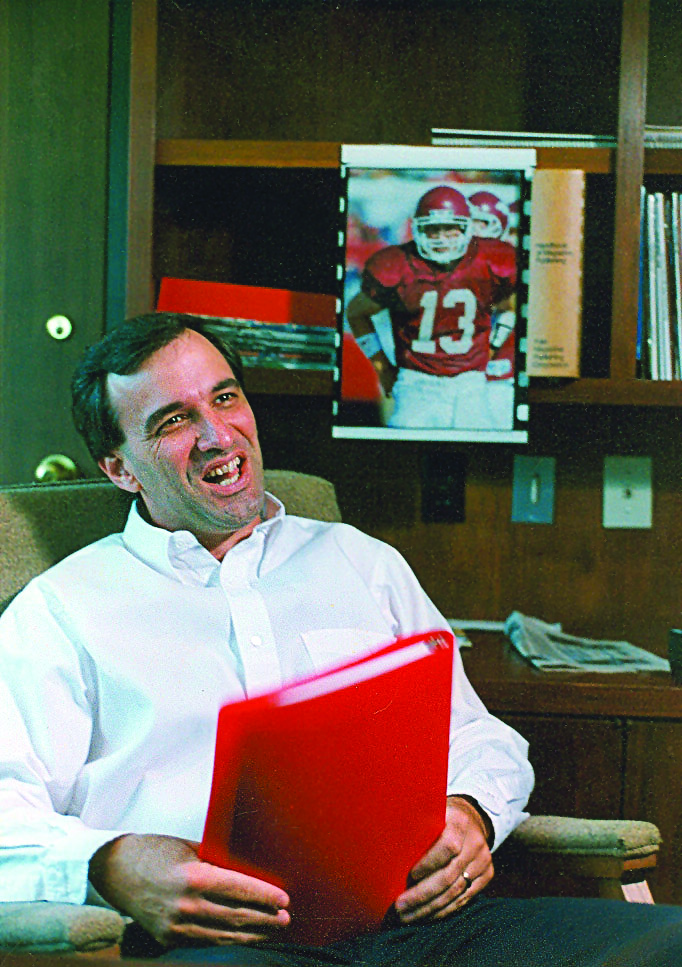 Clay Henry is shown on his first day of work at Hawgs Illustrated in 1992.

I don’t anticipate that I’ll ever take a job with benefits again. I’m sure projects will come my way. But with the price of gas, lots of trips to Fayetteville are not practical. I’ll be picky.

I’ve turned down many of late, including an offer to serve as color analyst for Yellville-Summit Panthers radio broadcasts. That was for girls softball. A man I met while speaking to a local rotary club thought I had retired here four years ago. He said I could make $25 per game. I apologized for declining, but explained that I was still publisher at Hawgs Illustrated. He didn’t understand how that was possible.

I’ll still visit the “insiders” forum at WholeHogSports.com because I want to keep up with family. Those folks have been family for over two decades.

I’ll probably still do some radio, but there is risk there. If I’m not completely plugged in, how can I be of value? Will I know what I’m talking about if someone asks about the backup offensive tackle?

What I hope I know is what’s the best fly for every bend in the Norfork River. I have a warning for the big brown trout in a place that I never put out of my mind while sitting in a press box in Tuscaloosa, Ala., or anywhere else. They won’t get the fall off. I will find them.

One of the highlights on a jet trip out of Fayetteville years ago was asking a co-worker to lean over to my window. A look straight down could reveal that two full generators were pumping water from the bottom of Norfork Dam. You could see that from 26,000 feet. It’s probably the only time in my life I’d have tried a parachute jump.

There are things to do besides fishing. I’ve booked an elk hunt with Colorado buddy Jim Daniel. That will wipe out the first two football games. There are no TVs where we are going on the side of a mountain near the Continental Divide near Walden, Colo. I’ve applied for an elk tag, either sex. But I’m going even if I don’t “draw.” Guess what, there are trout streams on the side of those mountains.

It’s going to be a strange new world. I don’t know if I’ll handle it as well as the last 30 years. I feel pretty good about the look back. I’m hopeful that maybe a few will want to read what happens next.

I’ve been thinking about picking the cover photo for my last Hawgs Illustrated. I wondered if there was a really good No. 13 on a Razorback roster.

OK, Connor Noland, you are going to be the answer to my last great trivia question.