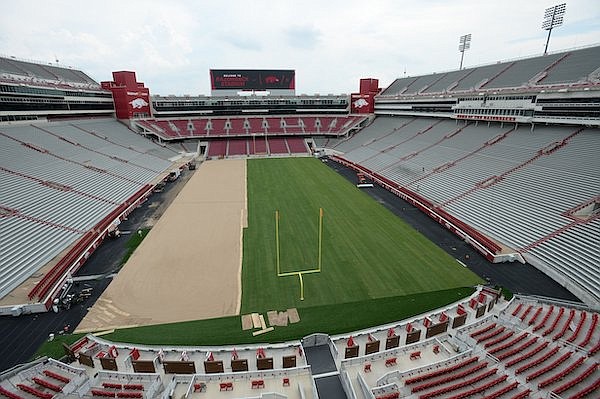 It would be the second time in three years that a new grass field will be installed inside the stadium. The Razorbacks switched from a turf field to a grass field during the summer of 2019.

The latest change is anticipated due to a Garth Brooks concert that is scheduled at the stadium on April 23. Crews will begin setup for the concert this weekend following an 11 a.m. practice Saturday inside the stadium that is open to the public.

In addition to the stage, approximately 8,200 chairs will be placed on the field for the concert.

“This (field) will likely be damaged beyond repair to bring it back to life,” Yurachek said from his office that overlooks the stadium. “They will come in Saturday and they will put that plastic square flooring across the field and that will knock it out.”

Arkansas made the change from turf to a natural grass strain known as Tahoma 31 in 2019. Since then a second Tahoma 31 field has been maintained on a sod farm near Memphis in case the field in Fayetteville was damaged.

Yurachek said the tentative plan is to begin the replacement process in June. Replacing grass with grass will not be nearly as complex as the changeover from turf in 2019, Yurachek said.

“Since that field is already grown there and the base is already here, it’s really simple,” Yurachek said. “There will be limited prep work. They will scrape this up, take this field out, level it off…and then they’ll have the field from Memphis brought over.”

The Razorbacks have practiced inside the stadium for most of the spring in order to save wear and tear on their grass practice field located south of the stadium.

“I think the kids enjoy going into the stadium,” Arkansas coach Sam Pittman said Tuesday. “I think Garth Brooks and them are going to tear it up pretty good anyways, so we figured we’d get as many good practices in there as we can.”

A turf field runs parallel to a grass field at the Razorbacks’ outdoor practice facility. Both fields were installed in 2013.

“They’ve come out with some newer turf and things of that nature,” Pittman said, “so we decided as soon as spring ball’s over, or sometime in the summer, that we’re going to replace it.”