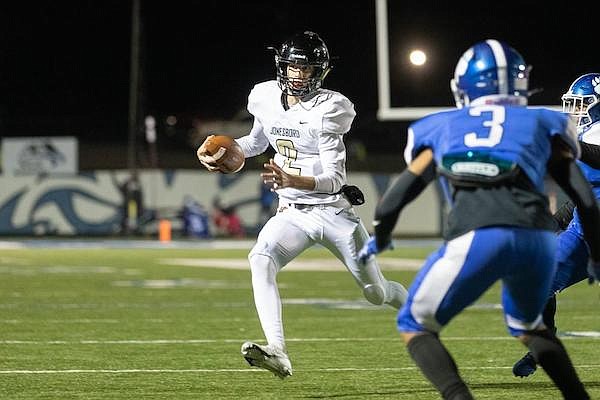 Jonesboro quarterback Rykar Acebo (2) runs with the ball during a game against Sylvan Hills on Friday, Oct. 30, 2020, in Sherwood.

Jonesboro quarterback Rykar Acebo committed Saturday to be a preferred walk-on at Arkansas.

He chose the Razorbacks over baseball interest from Arkansas State and interest from a number of teams to play football. Jonesboro coach Randy Coleman said Acebo’s dream was to play at Arkansas.

“He had interest from several schools but he was pretty clear he wanted to be a Razorback, if not for football, as a student,” Coleman said. “Rykar has always dreamed of being a Razorback, and it will be special seeing him don the cardinal and white."

“He has a strong arm and can make every type of throw,” Coleman said. “He’s got stones and you can see them when watching his highlight film, when making big-time throws with pressure in his face. He’s accurate, which is the most underrated skill a young quarterback can have. And, he’s extremely intelligent both on and off the field.”

Acebo, who visited Fayetteville in January, is the second Jonesboro player to commit to Arkansas as a committed walk-on in this year's senior class. Safety John Paul Pickens also committed to the Razorbacks.