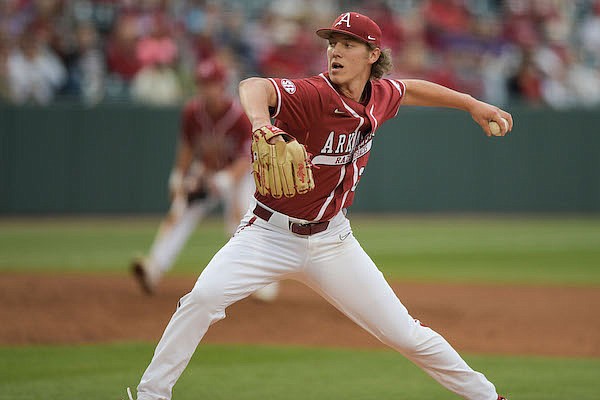 Arkansas pitcher Hagen Smith throws during a game against LSU on Friday, April 15, 2022, in Fayetteville.

At the suggestion of Razorbacks pitching coach Matt Hobbs, Smith threw more pitches in the bullpen before he took the mound for the first inning.

“Basically throw more on the mound pregame and have a lot of pitches sharp before I actually get on the mound,” Smith said of the new plan on SEC Network. “Like, take an inning before.”

The change seemed to work for Smith, who retired the first nine hitters he faced during the Razorbacks’ 4-0 victory over the No. 12 Tigers at Baum-Walker Stadium. Smith allowed 2 hits and 1 walk, and struck out 7 in 7 scoreless innings.

It was a contrast to Smith’s recent starts. Missouri and Florida each scored twice against Smith in the first inning, and Mississippi State scored once in the first after Smith walked three consecutive batters.

It appeared Smith might struggle with command early against LSU when he went to three-ball counts against Crews and Berry in the first inning. But he sat both hitters down swinging and seemed to be on cruise control for the rest of his 98-pitch outing.

“He recovered and got through it,” Arkansas coach Dave Van Horn said. “After that, obviously, he worked ahead a lot. He threw strike one with his breaking ball, changeup and fastball. He’s young and now he’s starting to gain experience. He’s learning how to settle down a little bit.”

Van Horn said Smith took his 4 2/3-inning start at Florida personal and worked hard throughout the week of practice. He also benefitted from a full week of rest, as opposed six days between his Mississippi State and Florida starts.

“He was on a mission and pitched really well,” Van Horn said. “He didn’t overthrow.”

Smith said the ability to throw a changeup was the difference against LSU.

“I threw a lot of changeups today,” Smith said. “In the past few outings, I haven’t been able to throw a changeup and that’s one of my better pitches, so I threw it a lot today. It felt good.”

Van Horn said his left-handed hitters showed a good approach during pregame batting practice and it carried over into the game.

A southwest wind was gusting around 20 mph, which knocked down balls to right field, but aided some hit to left.

“Our batting practice today in pregame there was I'd say 80% of it was going through the middle and going the other way with the left handers,” Van Horn said. “Two lefties got us a three-run lead pretty quick.

“It was really good to see our guys take some really, really mature type at-bats.”

Zack Gregory and Michael Turner each hit opposite-field home runs to left field in the third inning to put the Razorbacks ahead 3-0. Chris Lanzilli added another home run in the fifth when he pulled a ball to left.

“If you go to right field it’s going to get knocked down, even center field sometimes,” Gregory said, “so a lot of what we’re trying to do is just hit low line drives and it seems to pan out for us.”

Van Horn said the wind might have cost the Razorbacks at least three more home runs.

“I think (Braydon) Webb might have hit two home runs opposite field” on another day, Van Horn said. “A couple other balls probably got knocked down. But it's, honestly, they have learned how to hit to the wind a little bit.”

Seven of the last 12 SEC teams that lost in Fayetteville were ranked in the USA Today Baseball Coaches Poll at the time — Mississippi State (No. 2), Tennessee (18) and LSU (17) during the 2019 regular season; Ole Miss (18) during the 2019 NCAA super regional; Alabama (24) and Florida (8) last season; and LSU this year.

“It’s kind of intimidating coming here,” Gregory said. “I think everyone knows about this place and coming in and playing here, it’s a comfort thing knowing we have all those guys out there cheering us on. But for the other team I think sometimes maybe it’s a little intimidating with how many there are and how loud it gets. I don’t know. Maybe it gets our energy going a little. We just compete and play hard out there.”

It was Lanzilli’s fifth home run as a Razorback. He hit 42 home runs during his career at Wake Forest before transferring to Arkansas last offseason.

Arkansas has an active streak of at least three consecutive series victories against seven SEC teams.

The Razorbacks have not lost a series in their last 10 matchups against Tennessee, but that stretch includes a 1-1 week against the Volunteers in 2017 when one game was rained out.