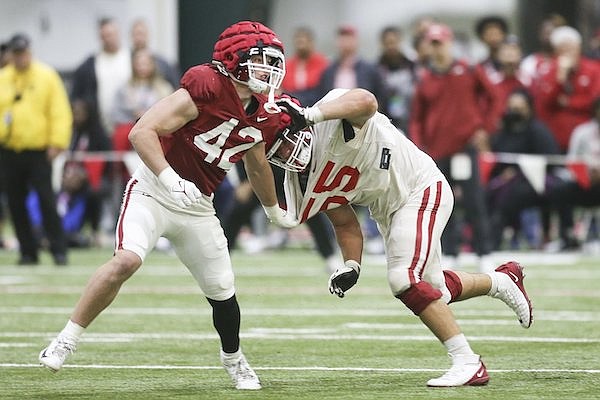 FAYETTEVILLE — The excitement needle lies flat on the good side of the meter for Arkansas football as Sam Pittman finishes his third spring as the head coach.

Pittman and the administration have agreed on a new contract that will keep him from leaving. They will both sign it soon. He’s happy. So is everyone else, especially his team.

So what excites the coach the most about his football team? I asked him to fill in the blank as he exited the last media session planned for this spring Saturday afternoon.

“It’s our toughness,” Pittman said. “It’s the only way to win.

“We all believe that. I’m not saying you don’t have to have players to win. You do. But we have toughness and I like where we are.”

Playing hard, tough and physical is what I’ve always thought was the essence of good coaching. That’s what Pittman has restored at Arkansas and is one of the reasons for last year’s surge to a wonderful 9-4 season.

Despite some key losses, this Arkansas team could be even better. It should be in every game as long as there aren’t devastating injuries.

But I wondered aloud how this team has scrimmaged its top two units hardly at all this spring and maintained toughness and physicality. It’s clear they’ve done that, but I’ve not known many teams that don’t scrimmage in the spring to be tough in the fall.

“I think we had half of one scrimmage (with top units),” Pittman said. “That’s it. In a normal spring you might have another 75-80 plays with them.

“But I think we’ve learned to thud in a way that seems to make us more physical.”

There was no spring game. SEC Network televised Saturday’s practice — and that’s all it was — inside Walker Pavilion. Heavy rains earlier in the day forced Pittman to cancel plans to work inside Reynolds Razorback Stadium with fans present.

A mixture of twos and threes — mainly threes — scrimmaged some Saturday, but no one who is a starter was tackled on purpose. Bumper Pool did crash into AJ Green and the running back tumbled to the turf. But he didn’t wrap him up in a tackle.

It’s not like the Hogs don’t hit. On any day with full pads, the offensive and defensive line, along with the linebackers battle fiercely. Pittman invited reporters to quiz his team on toughness.

“What we have is a team with a chip on its shoulder,” said Trey Knox, the likely starter at tight end. “Coach Pittman — and we hope he finishes his career here — has brought grittiness and toughness. We hit until you quit.”

Quarterback KJ Jefferson said the “thud” practices are more physical than a scrimmage.

“We get hit way harder (with a thud),” Jefferson said. “They just don’t tackle us.

“How we practice with such intensity is because we are loyal to each other. We know to keep each other healthy.”

Knox said the way the team practices is “intense. We bring it every day because we have no choice. It takes a close-knit team to practice the way we do and stay healthy.”

Pittman has talked about the toughness throughout this spring. He said it’s a source of pride throughout his staff.

“I think that’s the one thing I’ll say about our team, how tough and how hard we practice,” Pittman said.

How do you develop toughness?

“You do it with one guy first,” he said. “You show the team that guy. You get one person to buy in and give everything. Then you get a second, a third and a fourth. Then they hold each other accountable. That’s what we have now.”

It’s not like the Hogs lack talent, and more is arriving by the day. There was a huge throng of top-level recruits watching Saturday’s practice. They saw SEC talent all over the field and some are new arrivals.

Linebacker Drew Sanders dazzled with the way he took an angle to track Malik Hornsby, the quarterback-wide receiver who is likely the team’s fastest player. The 6-5, 232-pound Alabama transfer closed in a hurry. It was the day’s wow moment.

“Usually, Malik is leaving everyone,” Pittman said. “Drew did thud him up.”

Knox said there have been a lot of wow moments watching Sanders, who started three games last year at Alabama as an edge rusher.

“I have to block him,” Knox said. “That man flies to the ball as soon as he sniffs out the play. He’s also got a real athletic swim move, very athletic. In space, he can juke you and fly.”

"What he brings is a fast guy in space," Jefferson said. "He can also come down in the box and thud you.”

Safety Jalen Catalon calls what Sanders has shown this spring as simply “domination. He’s got a swim move I’m trying to learn. I can tell he’s been coached. He’s fundamentally sound.”

“Drew can cover some ground,” Pool said. “He’s got a long stride and takes good angles. I’m excited about his growth this spring.

“Our linebacker room has completely changed. We have a lot of talent. We have young guys who want to get better.”

Chris “Pooh” Paul, Jordan Crook, Kaden Henley and Jackson Woodard are others who have sparkled. They have received heavy scrimmage time as the young linebackers on the second and third units.

There was plenty of excitement in other areas Saturday. Pittman described first-team running back Raheim “Rocket” Sanders as an obvious bright spot.

“I think last year Rocket just tried to run hard,” Pittman said, noting the nuances of the position probably escaped him during his true freshman season. "He’s now becoming more of a craftsman of the position.

“He was probably wondering what his assignments might have been. Now, he sees his role. It enables him to make quicker decisions. He’s taken a turn from being a runner to becoming a running back.”

“I think they were probably thinking they weren’t going to play last year or maybe one of them was not even on the scout team,” Pittman said. “Now they are in position to get on the plane. Maybe last year they put a governor on their mind on how far they could go.”

Not now. Pittman said Parker “flashed” with some physical plays Saturday. His toughness has been evident as the spring has progressed.

That’s simply how you get on the field at Arkansas these days. Toughness will turn the head of this head coach. It’s apparently more contagious than any covid strain discovered so far.

It’s why the pride in Arkansas football is back.