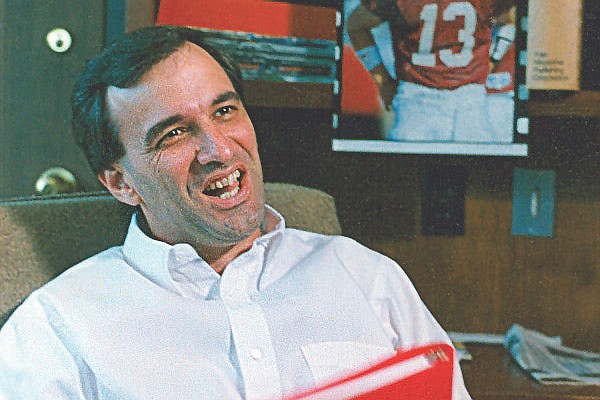 Clay Henry is shown on his first day of work at Hawgs Illustrated in 1992.

It was a bittersweet drive from Fayetteville to my home near the Norfork River on Saturday night after covering my last Arkansas football practice.

I loved what I saw of the Razorbacks and enjoyed a visit with my colleagues in the media who regularly cover the teams. The practice in Walker Pavilion was upbeat and fun.

I had fun visiting with Hunter Yurachek, who sought me out on the sideline ahead of the workout, the last open session for spring practice.

There was an enjoyable time with Mike Irwin, newly elected to the Arkansas Sportscasters and Sportswriters Hall of Fame. He was excited, as were the rest of us covering practice. He made me laugh as usual. His stories are alive and well, even from 40 years ago.

On the way out of the building there was a rich visit with Trey Biddy, publisher of HawgSports.com. We have competed, but have always been friends. We talked about my opportunities to watch NFL games on Sundays now that I'm not doing weekly magazines. Neither of us have ever had time for that.

We laughed about how some think we don't like each other. He reminded that there are two paintings in his house painted by my youngest daughter, Becca.

I won't cover any more practices — or games — but I'll still be connected to the magazine and I know its future.

Hawgs Illustrated will be great after I’m gone. I’m convinced that the WEHCO brass wants it to be great. With my retirement, they may help even more. I always sensed that they were careful not to step in strongly for fear of doing anything that I might see as meddling. That was probably wrong on their part. There are smart leaders and great resources.

I ask this of subscribers: give the next leaders of the magazine a chance. I was asked my thoughts on that, but it’s not my place. I have agreed to serve as a paid consultant for an extended period.

I’m pleased with what Hawgs Illustrated has been through the years. I love holding it in my hand. Your support is needed for it to continue to be what you want, the best thing in the mailbox for a Razorback fan.

There is nothing like it anywhere in college sports. There have been many publications at big-time schools, but I can say with pride that there has never been a four-color slick magazine for a school that delivers as much quality photos and writing. It will be that in the future, too.

I’ll write a column for each issue. I love to write so I was pleased when Brent Powers asked for that every time we talked over the last month. My stories might not be on that week’s game, but I know what Razorback fans want. I was taught that a long time ago, probably when I was wearing diapers.

The last part of this is dangerous. I’m going to try to thank some people. I’ll start with some of the many who helped mold my career.

I’ll start with my father, the late Orville Henry. I began to learn the business of covering sports riding in the back seat of the station wagon going to games in Fayetteville, or sitting quietly when he picked up Frank Broyles for his Sunday television show. There were a lot of those trips, probably some when I was in diapers.

I was the stat man for the Gazette team as early as age 14 and I sat in the jump seat on charter flights all over Texas. Sometimes on the road I was given a room with Jim Bailey. I count Jim as one of the first of my mentors. I knew he was mentoring me before I realized my dad was more than a dad.

I could list dozens of mentors from the old Gazette days. They all had a role in turning me into a sportswriter.

I’ll skip forward to my first job away from the Gazette (not counting keeping score at legion games, picking up range balls at Riverdale Country Club for my Uncle Bill or selling concessions at Ray Winder Field for the Travs), a stop for several years as sports editor of the Conway Log Cabin Democrat. Editor John Ward and Publisher Frank Robins taught me the ropes of a small town daily.

Bill Connors hired me at the Tulsa World in 1978. He asked me to cover college football, college basketball and golf. He gave me my first taste of what a magazine might be like. I was the editor of the annual football tabloid, always well over 100 pages.

Connors was as much a legend in Oklahoma as my father was in Arkansas. He taught me how to dress for work, how to engage coaches like Barry Switzer and Jimmy Johnson. He taught me to follow them onto the team bus on road games. I did that at Arkansas in the early days of Hawgs Illustrated. A coach never asked me to leave. They were eventually my friends. I asked detailed football questions. They liked it.

Connors set me up with a freelance gig with Sooners Illustrated in my last five years at the Tulsa World. It was delightful to write 2,500-word magazine features instead of having to write tight for the paper.

That introduced me to Bernie Kraft, the publisher for Sooners Illustrated, Huskers Illustrated and Voice of the Hawkeye. He wanted me to find him someone “like me” to edit an Arkansas magazine.

Eventually, I thought, "Why not me?"

Connors told me I should do it, but at a lunch in my last week he passed me a note that said he was about to retire and I would be the next sports editor at the Tulsa World. But he emphasized, “You will never own the Tulsa World. You might someday own Hawgs Illustrated.”

That was great vision, repeated by another friend, clothier Ed Beshara. He convinced me to take the job and said, “If it doesn’t work out, you can come back to Tulsa and sell clothes for me. You won’t be back.”

There were good people at Sports Magazines of America, the company that birthed Hawgs Illustrated with me at the helm. Chris Greer was a great co-worker.

Fast forward several years later my father told me to go see George Billingsley in Bentonville. We partnered to buy Hawgs Illustrated. He was a private partner with 40% interest. We sailed along beautifully and at his passing I’d already paid him back for my original loan to cover my 60%. The magazine never lost one dime.

Eventually, it grew to a point that I couldn’t handle the business end and do the writing justice. Don’t ask someone else to handle your money. I knew I had to sell.

Stephens Media approached me at the right time. Warren Stephens made me a deal I couldn’t refuse, plus offered one of his Falcon jets to fly me to games and back on the same day. Literally, it was a game-changer. Dennis Byrd helped organize that through the Stephens Media bureau in Little Rock. He always had an eye out for what the magazine needed as far as travelers.

Stephens Media would partner with WEHCO Media and Hawgs Illustrated became a division of the Northwest Arkansas Democrat-Gazette. WEHCO would later become the sole owner.

The supporting cast changed. There are dozens who contributed as either writers, photographers, graphic designers, circulation managers and ad sales representatives. All were great.

There were several printers along the way, but the last and best was Democrat Printing & Litho in Little Rock. My main man there, Matt Sadler, solved problems with the U.S. Postal Service, freight carriers and the magazine mostly came on time. There have been interesting calls, like power outages that shut down the building, and covid nightmares.

Everyone did their best all across Arkansas to send Hawgs Illustrated to Razorback fans. It was a pride thing.

There were some outstanding hires along the way. Among the contributing writers are legends, starting with Connors and my father. Harry King, Nate Allen and Jim Bailey contributed columns. Dudley Dawson was in almost every issue. These men are all like family.

Brad Dunn has sold ads for almost two decades. He made my life easier. Content is king, but advertising sales is god. Kraft taught me that and I did sell ads in the early days, including the back cover to Worthen Bank. That was important to print the first issue with an Arkansas icon as the lead advertiser.

I owe a huge debt to many editors from behind the scenes at the newspaper who helped me with the magazine while putting out a daily paper. Chip Souza has always made room for my columns in the paper and that often is difficult. I write long.

Fran Johnson is a beautiful person and great editor. She has tracked ad placement and given every page one final look for most of the last two decades. Kai Caddy has been our graphic designer for the last dozen years. He is a mindreader and an immense talent. He has delivered 20 covers a year that make me say, “Boom, he did it again!”

I’ve slipped in many ways over the last decade, but no one knew it because of the beautiful work from Matt Jones, Logan Wilson, Andrew Hutchinson, Jimmy Carter and Scottie Bordelon. I stumbled onto Jones during his undergrad days at Arkansas. He found the others and if he gave a thumbs up I always plugged them into the magazine.

Jones and Bordelon are incredible journalists, the heart and soul of our website and magazine. They make a strong team and made me look good at every turn. Dawson covered recruiting in an amazing way. I love these men.

My title has been publisher for the better part of 27 years, but I was under other managers at times. Seldom did they ever ask for one change, but I learned Mike Ferguson, Tom Stallbaumer, Jeff Jeffus, Todd Nelson and Powers were good listeners and ready to help when needed. Rusty Turner, executive editor at the two newspapers I’ve written for, too, has helped in hundreds of ways. Sandi Thompson, Cathy Staggs and Sandy Robinson have worked tirelessly in the business office to make my job easy.

With that sort of support, there was never one time that there was a chance Hawgs Illustrated could fail. It’s going to be just like that going forward. I’m so proud and lucky.