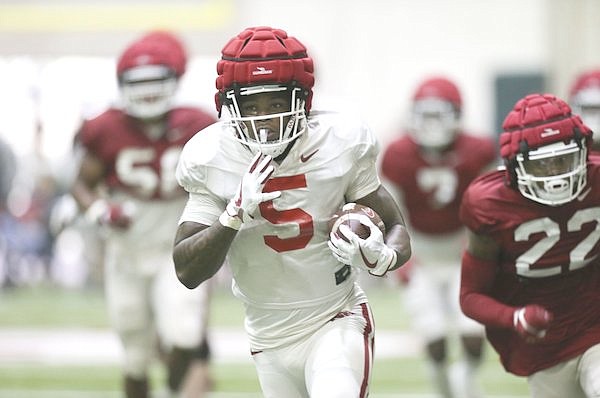 Arkansas running back Raheim Sanders (5) carries the ball during a scrimmage Saturday, April 16, 2022, in Fayetteville.

The Razorbacks went through a modified scrimmage in their 12th spring practice, including live tackling for the third unit, before a large crowd of prospects, parents and invited guests inside the Walker Pavilion, with live coverage on the SEC Network-Plus.

Morning rain and anticipated stormy weather around the 11 a.m. start time caused school officials to call off the “HogFest” activities and change the venue from Reynolds Razorback Stadium to the indoor pavilion, where stands were in place on the east side for parents and family members.

Raheim “Rocket” Sanders was the most productive skill player with seven carries for 66 yards, including a long touchdown run early in the workout.

Third-year Coach Sam Pittman said the “thudding” work has gone so well that spring practices have felt more physical, even without much tackling.

“In a normal spring we would’ve had … another 75-80 plays of live tackle than what we did this spring,” Pittman said. “But I do believe we’re thudding a lot better than we ever have.

“I thought it went well for roping off the end zones. … I thought we got it accomplished.”

The defensive units continued to show the good, quick pressure they’ve created much of spring, so the overall passing numbers were muted. Transfer linebacker Drew Sanders’ speed and pursuit flashed for the defensive starters, as did safety Jalen Catalon’s work in a green no-contact jersey, which included a key pass break-up.

Defensive end Zach Williams had a “sack” as the Hogs’ defensive front pushed the line of scrimmage back on occasion.

The Razorbacks sustained at least a couple of injuries. Defensive tackle Taurean Carter came out early with a left knee injury and receiver Warren Thompson was pulled for precautionary reasons after his helmet hit the artificial turf.

Pittman said he didn’t think Carter’s injury was major, but upcoming tests will confirm the extent of the ailment for a defender who has made a significant move this spring.

Pittman said he thought moving the practice inside wound up being the right call.

“I didn’t think we particularly threw the ball well or anything of that nature,” he said. “I thought the kids protected pretty good, think our runners ran hard. But it’s thud. You don’t have an opportunity to break a tackle or tackle a guy and knock the ball out. But I think we did the right thing, I guess is what I’m saying. I feel like we did the right thing.”

KJ Jefferson completed 8 of 14 passes for 63 yards while directing one scoring drive in regular move-the-ball conditions and another score in red zone work. Malik Hornsby had three of his passes dropped while going 4 of 14 for 47 yards. Cade Fortin went 4 for 9 for 62 yards and a touchdown during live-tackling work with the third team.

Raheim Sanders navigated through traffic over the left edge on the fifth play of the scrimmage and burst through for a 54-yard touchdown. The sophomore also scored a 6-yard touchdown in red zone work after Jefferson’s 12-yard completion to tight end Trey Knox.

“Just being able to get the signal and line up quick, he knows what’s going on,” Jefferson said of Raheim Sanders’ advancement this spring. “Him just being able to come in and take the spring and reps as a [starter] and just take it serious, it’s coming in, having fun and embracing it all.”

Pittman said he’s eager for injured tailback Dominique Johnson’s return this summer to fill out the running back room, but he’s pleased with the work of Raheim Sanders and others.

“I really like Dominique,” Pittman said. “I want him back as fast as we can. But in the meantime, the kids are getting better. Rocket, I think he just ran hard last year. … Now you can see that he understands what his rule is. He seemed to be a little quicker in making decisions, to me, this spring. I told him he turned from being a hard runner to a running back.”

AJ Green added 11 carries for 45 yards, with some of his work coming in live tackling periods.

Knox, who recently returned from concussion protocols, had three catches for 31 yards, tying Harper Cole for the team high.

Hornsby had one catch at receiver for an 11-yard gain. While he’s been uncorked for long gains as a passer, runner and receiver this spring, Hornsby was largely bottled up on Saturday.

Drew Sanders, working on the first unit with linebacker Bumper Pool, tracked Hornsby to the right edge and tagged up on the kind of play Hornsby has been striding deep downfield on this spring.

“He’s a huge asset to the team,” Jefferson said of Drew Sanders.

“I don’t know what his 40 time is or anything like that., but he runs from sideline to sideline,” Pittman added. “Today that was a ‘wow’ deal for me too, because I was like, ‘Malik’s out in the open and usually he’s leaving everybody.’ I’m not saying Drew can out-run Malik. I’m not saying that. But he did thud him up.”

Veteran linebacker Bumper Pool made his presence felt with the day’s hardest “thud,” which knocked Green to the turf before Pool shouted his approval.

“Physicality-wise, Coach Pittman breeds it into us that like, ‘Hey, we’re going to be physical’ at thud tempo,” Pool said. “But it’s still come and hit somebody.”

Fortin threw an 18-yard touchdown pass to tailback James Jointer on the first play of a red zone set.

The Razorbacks will continue spring practices with three more closed workouts next week.

Catalon said the team will continue to be physical and improve on the details of assignments the rest of the way.

“I always said, no matter what the tempo is or how many reps you have coming in, you always want to focus and make sure you’re getting better each and every day,” Catalon said. “I just want to keep on leading and keep being that guy for the room.”