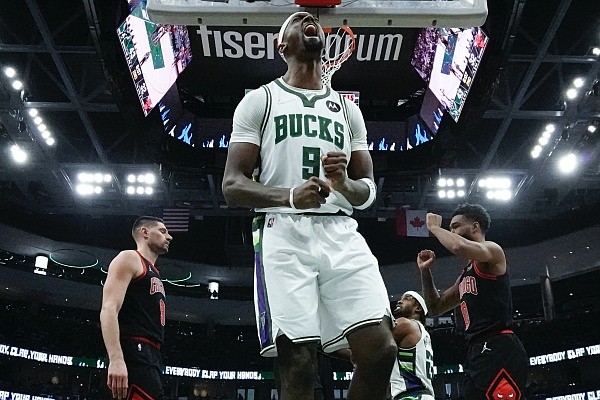 Milwaukee Bucks' Bobby Portis reacts after being fouled during the first half of Game 1 of their first round NBA playoff basketball game Sunday, April 17, 2022, in Milwaukee. (AP Photo/Morry Gash)

In Game 1 of their first-round series against the Chicago Bulls, Portis recorded a double-double facing his former team of four seasons. He finished with 10 points on 3 of 8 shooting and 12 rebounds over 23:21 in the lineup, helping Milwaukee grab a 93-86 win.

Portis knocked down 2 of 5 three-point attempts, and three of his 12 rebounds came on the offensive end.

The forward’s first score of the game came with under two minutes to play in the first quarter. Portis rebounded a Pat Connaughton left-wing miss from three and got an eight-foot floater to drop, giving the Bucks a 29-16 lead.

On Milwaukee’s next possession, Portis hit a left-wing three assisted by Jrue Holiday.

Late in the third quarter as the Bulls held a 71-68 lead, Holiday grabbed an offensive rebound and found Portis alone in the left corner for a three. A career 37.1% three-point shooter in the postseason, Portis has provided even more pop in the corners — 46.9%.

Defensively, Portis blocked a DeMar DeRozan attempt at the rim toward the end of the third, then opened the fourth quarter with a steal of Zach LaVine after switching on to him in pick-and-roll coverage.

Portis held Chicago players to 2 of 6 shooting as the primary defender, according to NBA Advanced Stats.

The story of the first full day of playoff games Saturday was Minnesota's 130-117 Game 1 win over the Grizzlies in Memphis.

The Wolves were led by their stars Anthony Edwards (36 points) and Karl-Anthony Towns (29 points, 13 rebounds), but the somewhat-stunning series-opening result was complete with strong contributions from complementary pieces, including Patrick Beverley, who played at Arkansas from 2006-08.

He finished with 10 points and was one of six Minnesota players in double figures.

He made 2 of 3 attempts at the rim and 2 of 3 three-point looks from the right wing. Beverley hit a dagger three with 2:42 left in the fourth quarter, giving Minnesota a 117-109 lead after shot faking Memphis’ Jaren Jackson Jr., who had seven blocks in the game.

Beverley’s six assists were spread among four teammates and generated 15 points, including two threes from Towns and one from Malik Beasley.

According to NBA Advanced Stats, Beverley defended Grizzlies star Ja Morant (4:52) more than any other Memphis player and limited him to 4 points on 2 of 5 shooting, 4 assists and 2 turnovers.

For the game, the Grizzlies were 5 of 13 shooting when defended by Beverley, and he forced 4 turnovers.

Moody scored the first playoff point of his career Saturday in the Warriors’ 123-107 win over the Denver Nuggets, knocking down 1 of 2 free throws.

The former SEC freshman of the year was 0 of 1 from the floor and three-point range, but pitched in 1 assist and 1 steal in 3:37 in the lineup. Moody drove baseline and found Damion Lee for a layup to put Golden State ahead 118-99 with 2:25 remaining.

Less than one minute later, he came away with a steal that led to his trip to the foul line.

Joe played 1:55 in the 76ers' 131-111 series-opening win over the Toronto Raptors on Saturday and did not attempt a shot. He committed a turnover on an inbound pass with 1:20 remaining.

Philadelphia defeated Toronto 112-97 on Monday to take a 2-0 series lead. Joe did not play.