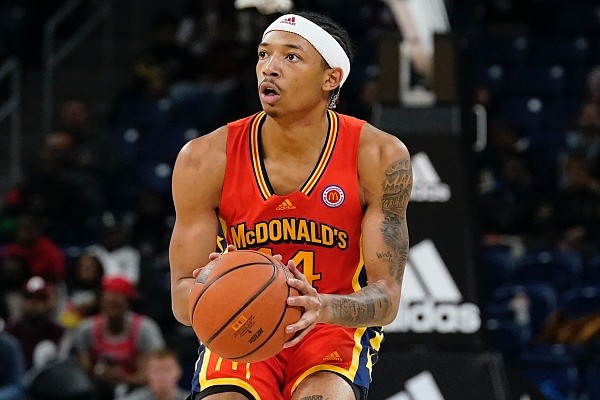 Smith had 27 points, 3 rebounds and 4 assists while shooting 7 of 13 from the floor, 5 of 7 from three-point range and 8 of 8 at the free throw line at the event in Chicago.

“He just comes with a mindset that it’s all business and it’s hard for kids to do that,” said Biancardi, who was part of the broadcasting team for the game. “He takes the game seriously and he’s a serious player. Plus, he’s talented, he shoots the ball extremely well. He has great elevation on his jumper, but he never settles on jumpers.

"He looks to attack and probe. He’s a dangerous facilitator because he demands so much attention. People try and stop him, but he’s not a one-trick pony. He keeps doing the same thing at a high level – scores, defends and plays a team game and competes.”

Walsh was also selected to the Jordan Brand Classic, but an ankle injury forced him to sit out.

Black, who is expected to sign with Arkansas on Wednesday during a 5 p.m. ceremony at his school, picked the Razorbacks over Gonzaga and numerous other programs.

“I talked to Anthony Black about going to Arkansas. He was 50-50,” Biancardi said. “He was not sure which way to go, but he said getting to know and play with Nick Smith and seeing him play really kind of turned him on [to Arkansas]. He said Nick takes care of his business, he’s a dog and he said I can create shots for other people and he can make shots.

"He said we can be a really good team, so my point is he [Smith] attracts other guys that are like him. I think he was part of the equation for Anthony to go to Arkansas.”

Biancardi said Smith and Black complement each other.

“They both know that, and they’re both mature enough to understand they can help each other,” Biancardi said. “Then you have Jordan Walsh in there, too.”

ESPN rates Smith (6-5, 185 pounds) the No. 6 prospect in the nation and No. 3 shooting guard. Biancardi and ESPN will release updated rankings Wednesday.

“He showed me a lot at the McDonald’s [game] and the practices and now here [Jordan Brand Classic]," Biancardi said. "The players are really attracted to him, so we’ll see where he ends up in the final ranking, but I can guarantee you one thing: he’s not going to go down.”