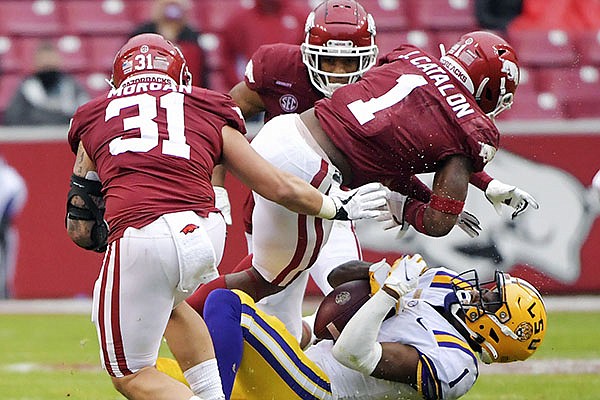 FAYETTEVILLE — Football players who are ejected for targeting during the second half of a game will be able to appeal their suspension for the first half of the following game beginning this year.

The NCAA Playing Rules Oversight Panel on Wednesday approved the appeals process for targeting, as well as an investigation process for teams suspected of faking injuries.

For targeting, a conference will submit a request to national coordinator of officials Steve Shaw, who will review the play. The conference will then decide whether a suspension is warranted for the first half of the following game.

"If it is obvious that a player was incorrectly penalized for targeting, the call would be overturned, and the player would be cleared to play in the first half of the next game," according to an NCAA news release.

Schools or conferences will also be able to report suspected instances of faked injuries to Shaw, who will provide feedback to the conference. Any penalties against a team would be decided at the conference level.

According to the NCAA, playing oversight members discussed in-game options to address faked injuries and how pace of play contributed.

"We considered all options to address this issue, including allowing both teams an opportunity to substitute after a first down," said Stanford coach David Shaw, chair of the NCAA Football Rules Committee. "This is another step to consider in the future."

Other rule changes for 2022 include:

• Blocking below the waist will only be allowed by offensive linemen or stationary backs inside the tackle box.

• Any simulation of a feet-first slide will result in a play being blown dead and the ball will be marked at the spot the slide began.

• All defensive holding penalties will carry a 10-yard penalty and automatic first down.