Arkansas ready for shot at Florida 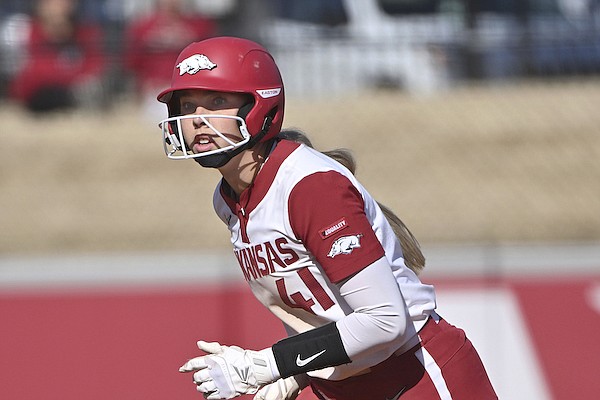 The University of Arkansas softball team shared the SEC regular-season title with Florida a year ago, but first baseman Danielle Gibson said she still believes the No. 7 Razorbacks have something to prove this weekend in Gainesville, Fla.

Arkansas and Florida tied with 19-5 league records, but they never played each other last season. The Razorbacks and Gators square off this weekend for a key three-game series beginning tonight at Katie Seashole Pressly Stadium.

“So I think that a lot of the SEC, probably the majority, doesn’t really have any respect for us and our wins last year,” Gibson said Wednesday.

Arkansas Coach Courtney Deifel engineered a turnaround in the program from a team that finished last in the league in her first season (2016) to claiming a share of the title a year ago. But even teammate KB Sides, a graduate transfer who played for Alabama a year ago, told Gibson the view from the outside was that Arkansas wasn’t always respected. But she’s seen firsthand the Razorbacks are for real this season, Gibson said.

Deifel still sees her team fighting for respect, too, after third baseman Hannah Gammill was left off the top 25 finalist list for the USA Softball Collegiate Player of the Year that came out Wednesday.

Gibson, a second-team All American last season who has been among the top five in batting average nationally most of the season, made the list. Gammill, who Deifel noted is fifth nationally in OPS and only a sophomore, did not.

“I think our level of play has gained respect across the conference,” Deifel said. “I just do believe our players deserve more credit than they are getting.”

Arkansas took two of three from then-No. 8 Kentucky last weekend in Bogle Park and got a tremendous pitching performance from junior Chenise Delce. The transfer from Tulsa tossed a four-hit shutout on Sunday and allowed one run in the complete-game victory Friday.

Delce (11-2) pitched despite being ill Sunday, and she’s still be dealing with the issue this week, Deifel said.

Deifel said she doesn’t anticipate it being a problem.

“She’s still fighting it,” Deifel said. “She missed [Tuesday], but got a bullpen in [Wednesday]. … She’s about as tough as they come. She’ll be fine.”

The Gators present a significant obstacle.

Florida (35-9, 11-7) is ranked eighth in the country, one spot behind Arkansas in the latest USA Today/National Fastpitch Coaches Association poll. The Gators currently sit fourth in the SEC standings, coming off a series sweep of Ole Miss last weekend.

Florida has won two national championships and made 10 Women’s College World Series appearances under Coach Tim Walton in the past 17 years. Their confidence as a team is something that is striking, Deifel said.

“They play impeccable defense, so they make you earn everything that you get,” Deifel said. “But they’ve always had this confidence about them that you wish you could bottle up and take with you.”

Florida will be without second baseman Hannah Adams, an All-SEC selection and third-team All American pick a year ago. She suffered a hand injury last weekend and will be out a minimum of three weeks, Walton said earlier this week.

The Razorbacks sit atop the league standings, percentage points ahead of Alabama even though the Crimson Tide (38-6, 13-5) have played one more series than Arkansas.

Arkansas won’t have history on its side this weekend. The Razorbacks have lost 30 consecutive games to the Gators and haven’t beaten them since 2007. Deifel said that’s not something she or the players think about.

The team had a chip on its shoulder all of last season and Deifel said that hasn’t gone away this year.

“I hope this team has that extra edge that wants to shove it a little bit,” Deifel said.

Walton said his team will need to pitch well to contain a potent Arkansas offense. The Razorbacks rank third nationally in team batting average (.347), tied for second in runs per game (7.72) and tied for fourth in home runs (81).

“For us to win the game, we have to keep Arkansas below five and we got to keep the ball in the ballpark and we can’t give extra outs,” Walton said. “If we give them extra outs, it’s not going to go very well for the Gators and that’s part of our belief system. Solo home runs don’t typically lose you a game or a series.”