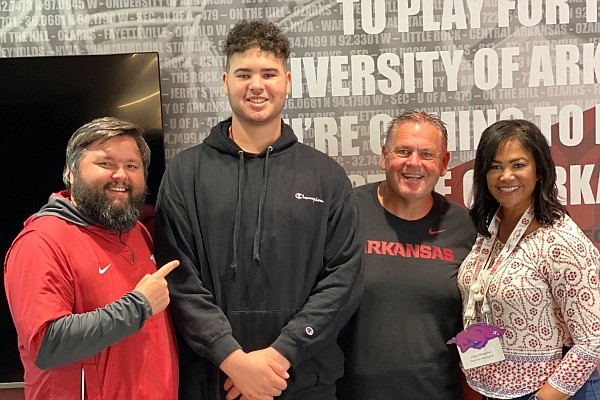 Four-star sophomore offensive lineman Fletcher Westphal made his way to Fayetteville for his first look at the Razorbacks and was blown away.

“Kind of blew me away. You know, you’re in Arkansas and my first time being in the state and at home in Virginia you think, ‘Oh, Arkansas,’" said Westphal, who made the trip with his mother. "'What’s there to do here?' And then you get here. There’s everything.

"They have brand new facilities, you have a coaching staff most schools would probably dream of and you have a great town to surround it.”

He is likely to see an offer from Arkansas come his way in the near future. Westphal said watching practice was the best part of the trip.

“Although it was a little windy out today,” Westphal said. “You get to see coaches work. That’s kind of the main reason why we picked today.”

Westphal said the trip help Arkansas’ chances with him.

On3.com rates Westphal as a 4-star prospect, the No. 15 offensive tackle and No. 202 overall recruit in the nation for the 2024 class. Westphal is the No. 4 prospect in Virginia in his class.

He enjoyed getting to know offensive line coach Cody Kennedy.

A return trip to Fayetteville is likely.

“Absolutely, as long as I can make it down here,” he said.