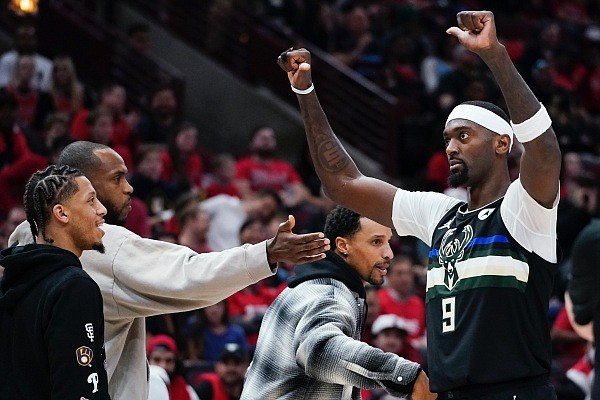 Milwaukee Bucks center Bobby Portis, right, celebrates with teammates as he walks back to the bench during the second half of Game 4 of a first-round NBA basketball playoff series against the Chicago Bulls Sunday, April 24, 2022, in Chicago. The Bucks won 119-95. (AP Photo/Nam Y. Huh)

Since dropping Game 2 of their first-round series against the Chicago Bulls in Milwaukee, the Bucks have displayed their dominance and made a statement even down an All-Star starter.

Bobby Portis, facing the franchise that drafted him out of Arkansas in 2015, was a key cog in Milwaukee’s success in Games 3 and 4 over the weekend. In that stretch, the 6-10 forward played the best basketball of his playoff career.

“Bobby, he’s got an edge, he’s got a competitiveness, his shot making (was critical),” Milwaukee coach Mike Budenholzer said. “I think him coming out and making shots early was big for us. Bobby was great.”

Portis’ four three-pointers set a playoff career-high and were his most in a postseason game since hitting 3 of 7 attempts against the Miami Heat in Game 4 of last year’s first-round series. He also knocked down three triples in his playoff debut in 2017 with the Bulls.

Wearing a pair of protective glasses as a result of a right eye abrasion suffered in Game 2, Portis gifted Milwaukee with first-quarter pop offensively, adding 8 points on 3 of 6 shooting — 2 of 3 from deep — and 5 rebounds in 8:18. He had 10 points at halftime then pitched in 5 more to go with 5 rebounds in the third quarter.

Portis, penciled into the starting lineup in place of the injured Khris Middleton (MCL sprain), was dominant on the backboards, grabbing a playoff career-high 16 rebounds. His previous playoff high was 12 in Game 1 of the series. He had 13 defensive boards in the win.

“It was a big game for us,” Portis said. “No excuses to be made. One of our brothers went down and guys had to step up. You can run and jump or you can go play. It’s one of them things where you’ve got to make an adjustment and just go hoop, man.

“The basketball gods were with me tonight a little bit.”

Milwaukee took a commanding 3-1 series lead with a 119-95 win in Chicago, and Portis got tangled up with Bulls guard Zach LaVine in the game's closing minutes.

With his second consecutive double-double and third in four games this postseason, he is averaging 11 points and 10 rebounds early in the Bucks’ playoff run. And in four starts in his playoff career, Portis has averaged 16.5 points and 10.8 rebounds.

“You know me, I hate talking about my personal self. I really do,” Portis said. “I’ve always been a team guy my whole life. I just like winning. With me personally, man, when I talk about moments, it’s always about moments. It's not how many points you score, how many rebounds you get.

Game 5 is scheduled for Wednesday at 6:30 p.m. and will be available via NBA League Pass. Should Milwaukee win, it will advance to face the Boston Celtics in the Eastern Conference semifinals.

Portis has posted 12 points and 7.1 rebounds in 20 career games vs. Boston.