Burks opts for home over Vegas on big night 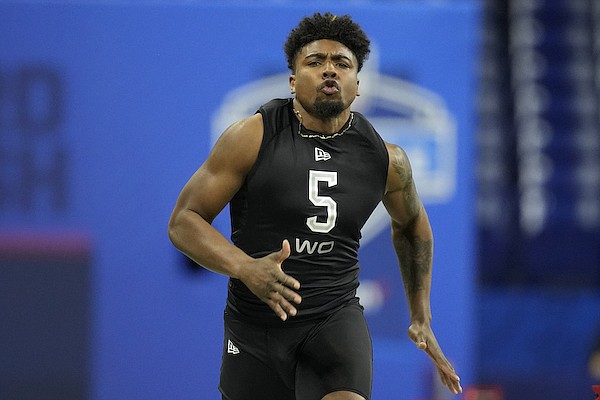 FAYETTEVILLE — Treylon Burks was invited to attend the splashy NFL Draft show at Allegiant Stadium in Las Vegas tonight as a strong first-round selection candidate. The early declarer from the University of Arkansas is expected to be one of the first wide receivers off the board during the seven-round draft.

Neon, glitz and strobe lights aren’t exactly in the wheelhouse for Burks, a country boy at heart from Warren who considers a wild boar hunt more thrilling than a roulette wheel and mammoth marquees.

Besides, how could he not let friends and family, especially great-grandmother Freda Burks, in on the moment his dreams will be realized, his financial future potentially sealed, when he hears his name called during the draft?

“Everybody knows my great-grandmother,” he said. “That’s my decision. I didn’t want to put her on a plane to fly all the way out there. I’d rather have it at home where she can attend.”

Burks, his fiance Shelby Pearlman and invited guests will be at the draft party at a home in Searcy. From there, he will be involved in the “NFL VIRTUAL” draft coverage.

Ohio State’s Garrett Wilson and Chris Olave, Alabama’s Jameson Williams, and USC’s Drake London are the four wideouts among the 21 players who accepted invitations to attend the draft in person. They are the prospects Burks is in competition as the top wide receivers available.

Burks, who declared early after a huge junior season, knows innately that he has a chance to be one of the best NFL skill players the Razorbacks have ever produced.

Representing his home town and university are meaningful for the 6-2, 225-pounder.

“It means a lot because those are the places that made me who I am,” he said during a recent promotional appearance at Raising Cane’s on MLK in Fayetteville. “Why change up on the places that made you? You can just put a name out for them and other kids that come through there can make a name for themselves.”

Burks did not wow with his 40-yard time at the NFL Scouting Combine, a 4.55, that, combined with other testing metrics, made some analysts wonder if he would be among the top receiver picks.

“I don’t care what nobody thinks,” Burks said. “All I can say is go watch film and see if I’ve been caught with that 40 time.”

Burks was measured at 22.6 mph while running in the open field on a 91-yard touchdown against Georgia Southern on Sept. 18, one of the fastest speeds in college football last season. No play in the NFL featured a player running faster than 22.6 mph last year, according to NFL Next-Gen Stats.

When he is selected, Burks’ highlight reel won’t just include that speed-merchant touchdown against Georgia Southern and him dominating less-talented defenders.

The back shoulder throw he caught on the Alabama 49 and then left five Crimson Tide defenders scrambling in his dust on a 66-yard touchdown will be a prominent clip. That was part of his 8 catches for 179 yards and 2 touchdowns against the Crimson Tide secondary, when Burks put in one of his best showings against one of the nation’s top defenses.

Other highlight clips will his one-hand, toe-tap masterpiece of a touchdown in Arkansas’ 33-21 homecoming victory over Ole Miss in 2020, and his single-coverage beating 85-yard touchdown catch and run, even while stumbling, to set the tone in the Razorbacks’ win over No. 7 Texas A&M last year.

Burks came to Arkansas a year after linebacker Bumper Pool and those two classes went through a couple of years of taking beatings throughout the SEC before helping spearhead a renaissance.

“He’s the definition of greatness,” Pool said. “He’s got such a great mindset. People that have the talent that Treylon has, they can take it and go so many different directions with it. He’s such a great person, such a great worker. He’s one of the greatest Hogs to put the jersey on, and I hope that everyone realizes that.”

Burks’ talent was evident as a youngster in the training grounds of Warren, where he was a ball boy for Hembree’s Lumberjacks as a third-grader.

“Being in Warren, we really only have one place you can play sports and that’s the YMCA. So since the YMCA days, I’ve seen Treylon play,” said former Arkansas wide receiver great Jarius Wright, who spent eight seasons in the NFL after setting records with the Razorbacks.

“I’ve known Treylon outside of just sports. I’ve always known Treylon. Compared to the other kids, he was always a monster and he always played like that, so this is nothing new.”

Hembree, who has overseen a wide receiver pipeline through Warren that has fueled the upper levels of college football for well beyond a decade, said Burks is a better person than he is a player.

“I know a lot of people say that but it’s true with him,” Hembree said. “He picked Arkansas when it wasn’t flashy to pick Arkansas back three years ago. That was a tough process because he had offers from about everywhere in the nation.”

Hembree said Burks struggled with his decision to turn pro over the Thanksgiving break — after he caught 7 passes for 129 yards and 1 touchdown in a 34-17 win over Missouri in his last game as a Razorback.

The two met at the Warren fieldhouse on the Sunday after Thanksgiving.

“I went out there and you could tell it was weighing on him,” Hembree said. “He didn’t really know what to do. There was a lot of people coming at him from different directions telling him what to do.

“What people have to understand is he could have gone anywhere in the nation and he chose Arkansas when Arkansas was not very good. And pretty much he gave his heart and soul and it’s just the way he is. He gave everything he could to Arkansas for three years, and then he made a tough decision.”

Burks’ call to turn pro kept him from practicing for and playing in the Razorbacks’ 24-10 win over Penn State in the Outback Bowl on Jan. 1.

Wright owns a few UA records, including 2,934 career receiving yards, 12 receiving touchdowns in a season (2011) and 13 catches in a game.

One decade later, Burks challenged some of those marks while catching 66 passes for 1,104 yards and 11 touchdowns, breaking the school record for single-season 100-yard receiving games with 6. His 10 career 100-yard games are one ahead of Wright and one shy of Anthony Lucas’ school record of 11.

“You know, I was actually hoping that he would break some because who better than a guy from the same town you are, a guy you watched grow up, break your record?” Wright said.

Burks said Wright reached out to counsel him several times during his career, including the lead-up to the draft.

“He’s helping me throughout this process, and just encouraging me to keep going, and the finish line is almost there, and after the finish like there’s still another finish line you need to reach,” Burks said.

‘I did an interview with somebody and I told them they hadn’t seen the best of Treylon Burks yet and that was before he took off,” Wright said. “You think about Treylon, and I think it was his senior year in the state championship game, he had like 15 tackles on defense and like 200 receiving yards on offense. That spoke to the kind of athlete he is.”

Wright said Burks’ pro potential is off the charts.

He’s not a consensus first-round projection. NFL.com’s Chad Reuters has him going to Chicago with pick No. 39 in the second round.

Burks worked at the Exos training facility in Frisco, Texas, in preparation for the combine and the UA’s pro day. Since then, he’s traveled to work out for individual teams and kept up his training regimen.

“I’ve been to 14 teams,” Burks said. “I would say half of the whole NFL, just getting to know the coaches and some of the players and things like that.”

Draft night is liable to produce some strong emotions in Burks.

“I’’m not going to lie to you,” he said. “I might shed a couple of tears. I’ll try to stay strong. But I’ll just give it all to God and thank him multiple times.”