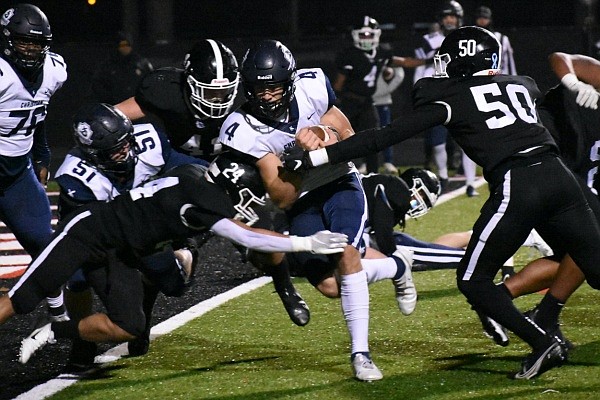 “Obviously it was cool, especially coming from the head coach. I hadn’t really had that happen yet,” White said. “Every offer I get, my heart kind of stops for a second just because it’s exciting. You work for it and it’s fun to see these offers.”

White, 6-3, 223 pounds, has seven other offers from schools such as Ole Miss, Louisville, Pittsburgh, Mississippi State, Virginia, UCA and Tulsa.

Pittman told him why Arkansas offered him now.

“He said Briles and Loggains went to our practice and they weren’t going to offer me until I got up to camp in front of Sam Pittman,” White said. “But Briles and Loggains said we need to offer this dude right now. We’ve got to get on him early because things are going to start shooting for me. They basically told Coach Pittman that I did really good in practice, so Coach Pittman believed them, so he gave them the green light to go ahead and offer.”

White’s great-grandfather Harold “Greasy” Rees played football for the Razorbacks; his grandfather John Rees played receiver from 1968-70; and his uncle John Aaron Rees played from 2005-2008. His father, David, played golf at Arkansas in the early 1990s.

His brother, John David, played receiver at Arkansas until transferring to UCA in January. His brother, Zac, was an infielder for the Razorbacks' baseball team last year.

Having a family full of Razorbacks made the offer exciting, but he’s trying to maintain a level head about the recruiting process.

“I know my family is going to be proud, but I try and not focus on it too much because I told my family I’m going to go where I feel like I can play the most and play the best,” he said. “They’re really excited for me. It’s cool to make them proud because they’re huge Hog fans, but I try and keep a straight mind.”

White attended an Arkansas camp last summer and plans to participate in a camp again this June.