Razorbacks have a few draft hopefuls 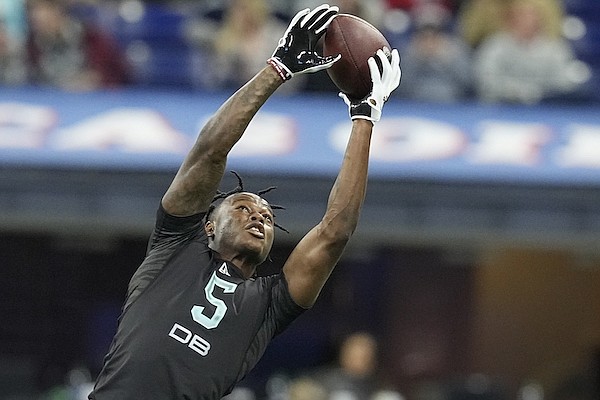 FAYETTEVILLE — Only first-round selections in the NFL Draft will be made tonight from Allegiant Stadium in Las Vegas.

That means all but 32 draft hopefuls will still be hanging by the phone the following couple of days when the seven-round draft continues with two more rounds on Friday and the final four rounds on Saturday.

University of Arkansas wide receiver Treylon Burks is a solid choice to be taken today, with the betting site betonline.ag giving an over-under number for his draft slot at 23.5.

Another dozen or more players with in-state ties are expected to either be selected in the draft or signed as undrafted free agents by the end of the weekend.

In Ridgeway’s lone season with the Razorbacks, the transfer from Illinois State helped the program turn in a 9-4 record, its most successful season in a decade and made a name for himself as a mauler on the defensive interior.

Arkansas defensive coordinator Barry Odom, speaking about the play of defensive tackles Isaiah Nichols and Taurean Carter to that point, brought up Ridgeway.

“That’s why Ridgeway was so important last year,” Odom said. “Because he’s just a beast inside. He took up, a lot of times, two guys and filled up space.”

Ridgeway was projected as the No. 95 pick in the third round to defending AFC champion Cincinnati by The Sporting News, while Brown was projected at No. 141 to Baltimore in the same mock draft.

Ridgeway was seen as the No. 154 pick by Dallas in the fifth round by CBSSports.com, while Cunningham was projected as the No. 164 pick by Las Vegas in the same projection.

Ridgeway said his season at Arkansas was a key in receiving a Senior Bowl invitation, which then gave them the opportunity for scouts, coaches, general managers and other NFL personnel to see his work ethic and talk to him.

One day at the event in Mobile, Ala., he was the first player on the field as rain fell. Ridgeway wanted to get to work and increase his stock. The conditions were an afterthought.

“I do this every day rain or shine,” he said. “When it came to like playing the inside run or in team, I wanted to show no one could block me. I’m going to make sure I can do everything I can that if the ball is coming my way I’m going to tackle them. Making sure I’m letting people know if I have a designed gap, I’m going to stay in that gap and no one is going to come through it.”

Senior Bowl executive director and former NFL scout Jim Nagy said in late November that Ridgeway was one of the top risers in overall draft stock and at his position.

Brown, a senior from Ashdown who turned down a final season of eligibility, discussed the feedback he got from the NFL combine.

Cunningham, a Warren, Ohio, native who transferred from Iowa Western, said playing his bonus year in 2021 at left tackle was helpful to his draft stock.

“I think it just gave me another season to showcase what I can do in arguably the best conference in America,” he said. “I think … it helped me get bigger, stronger, faster and more prepared.”