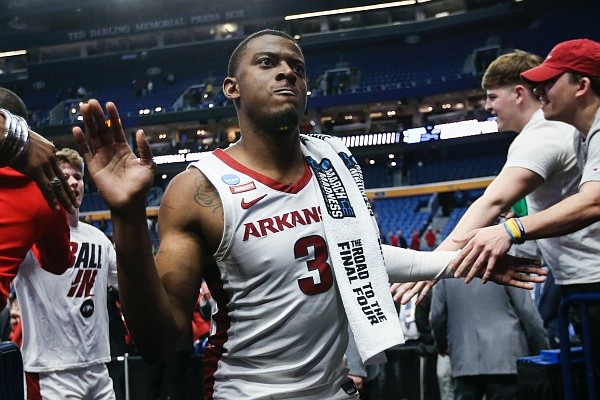 Arkansas forward Trey Wade greets fans, Thursday, March 17, 2022, at the end of their win in the first round of the 2022 NCAA Tournament at KeyBank Center in Buffalo, N.Y.

A member of Arkansas’ 2021-22 men’s basketball team has thrown his hat into the ring for this week’s NFL Draft.

Trey Wade, a forward who transferred to the Razorbacks from Wichita State last spring, posted to his social media accounts that he is “partaking” in the three-day event that begins Thursday.

“Good luck to everyone who has worked to get to this point and I can assure you that I will be a great addition to any organization that’s willing to take a chance on me,” Wade wrote.

Given Wade’s 6-6, 220-pound frame, he looks the part of a linebacker or tight end. Arkansas coach Eric Musselman tweeted Wednesday that Wade had been invited to an NFL mini camp in mid-May.

Prior to last season, Adam Engroff, a friend of Musselman who is a scout for the Miami Dolphins, stopped by one of the Razorbacks’ basketball practices. Musselman said in his tweet that Wade “continues to garner NFL interest.”

“Trey had made the comment that if things didn’t work out for him professionally with basketball that he would to try football,” Musselman said last November. “And I told Adam that he should keep an eye on him during our practice.

“Certainly with his body, you think about basketball players turned football, I mean, there have been some good guys.”

Wade has not played organized football since he was 12. He said in November that he had aspirations of playing the game growing up.

“I eventually had to pick a side,” Wade said. “When I was 12, I was on a team with my brother and he broke his ankle and his wrist in the same season. That was kind of like (when I decided), ‘OK, I think basketball is the way to go.’”