Deifel: Senior class made a difference 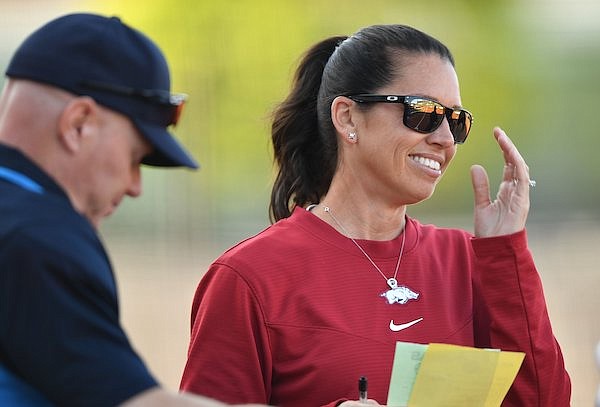 Arkansas coach Courtney Deifel laughs Tuesday, April 26, 2022, with umpires before the start of the Razorbacks' 3-2 win over Central Arkansas at Bogle Park in Fayetteville.

FAYETTEVILLE — For eight seniors on the University of Arkansas’ softball roster, their final regular-season weekend at Bogle Park will mark the end of a journey that began with a vision of turning the program into a championship contender on a national level.

Seniors Taylor Ellsworth, Danielle Gibson, Mary Haff, Linnie Malkin, Hannah McEwen, KB Sides, Sam Torres and Valerie Ventura will all be recognized Sunday after the final game of a three-game series with South Carolina that starts at 6 p.m. today. All three games will be streamed on SEC Network-Plus.

“What they have done for this program is … I don’t think there are enough words,” said Razorbacks Coach Courtney Deifel. “They committed to come here and leave their mark and they have done that. They came here and believed in our vision and brought it to fruition. They knew what this could be and they did it.

“There literally are not enough words about what these seniors mean to me and this program.”

No. 7 Arkansas (36-8, 14-4 SEC) will ride a wave of momentum into the final regular-season home series against the Gamecocks (25-24, 2-16). For the first time in program history, the Razorbacks swept a series against Florida last weekend, then rallied to edge Central Arkansas 3-2 on Tuesday on Marlene Friedman’s two-run home run in the sixth inning.

Junior right-handed pitcher Chenise Delce dominated for the Razorbacks against Florida, posting two wins and a save to earn SEC Pitcher of the Week honors. She recently added a new pitch to her arsenal with a knee-bending drop ball, which proved effective against the Gators.

“I had never thought I would be able to throw it,” said Delce of the new pitch. “I’ve always relied so much on a rise ball that the thought of throwing the opposite of that was just not something I thought could happen. I’m still having trouble saying I have a drop ball.”

Deifel said her team did last weekend what it has done all season.

“Our team was just so business-like and they have been all year,” she said. “So they just took care of business and found a way to get it done each day and that’s really what they’ve been like all year, just staying the course.”

Gibson had a big series against Florida at the plate with five RBI. She is hitting .452 on the season with 15 home runs, one behind team leader Hannah Gammill. Gibson and Malkin share the team lead in RBI with 52.

Riley Blampied will lead the Gamecocks into the weekend series. Blampied is batting .333 with 14 doubles. Katie Prebble leads South Carolina in homers with 13 to go along with 40 RBI.

The Gamecocks were swept at home last weekend by Ole Miss, scoring four runs in three games and getting shut out 3-0 in the series finale.