Titans give Burks his NFL call 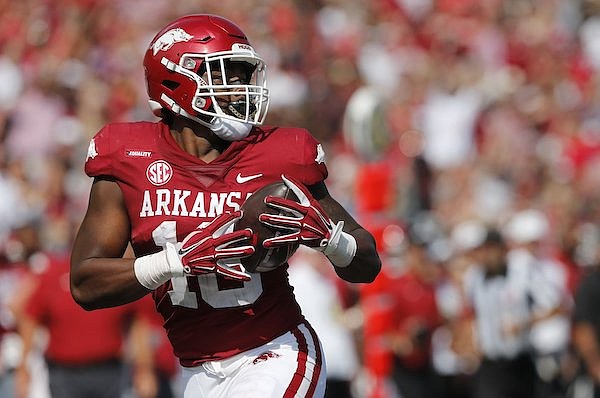 Arkansas receiver Treylon Burks catches a touchdown pass during a game against UAPB on Saturday, Oct. 23, 2021, in Little Rock.

FAYETTEVILLE — Former University of Arkansas wide receiver Treylon Burks was picked with the 18th selection in the first round of the NFL Draft on Thursday night by the Tennessee Titans, who traded up to the spot to draft him.

The Titans traded away former Ole Miss wideout A.J. Brown, whose physical play from the slot draws parallels to Burks, to the Philadelphia Eagles to obtain the pick.

“My high school coach said this morning that the Titans were going to get me,” Burks said. “I didn’t believe him at the time, but once I got the call I was like, ‘This dude was right.’ ”

Burks had received an invitation to attend the draft in person in Las Vegas, but he wanted to remain close to home to be with his great grandmother Freda Burks, his fiancé Shelby Perlman, and many other friends and family members.

Burks, wearing a white dress suit, watched the draft from a large house party with about 150 guests in Searcy. Smiling wide, he hugged his great grandmother moments after being taken in footage aired by the NFL Network.

Arkansas Coach Sam Pittman attended the draft party and gave Burks a hug soon after the pick, and current South Carolina receivers coach Justin Stepp, who recruited Burks in 2018 for the Razorbacks, was also in attendance.

Burks told members of the Nashville media he didn’t want to be thought of as taking Brown’s role.

“I’m happy to be part of the team now and play my role,” he said. “I wouldn’t say I am [Brown’s] replacement, but I am thankful for the opportunity and that they believed in me to make that trade.”

Burks spent a day in Nashville visiting at Titans’ headquarters during the lead up to the draft.

The Warren native is Arkansas’ 24th first-round NFL Draft pick and its first since Frank Ragnow was taken with pick No. 20 by the Detroit Lions in 2018. Burks, a 6-2, 225-pounder, declared early for the draft after a big junior season, highlighted by huge games against Texas A&M, Alabama and Missouri.

Burks, 22, was the sixth wide receiver taken in the first round, behind Southern Cal’s Drake London, Ohio State’s Garrett Wilson and Chris Olave, Alabama’s Jameson Williams, the former Buckeye, and Penn State’s Jahan Dotson. The first four of those were all taken between picks 8-12.

“He is a monster after the catch,” Jeremiah said on the draft coverage. “Of all the top receivers in this draft class, those top six guys, it’s him and Jameson Williams who are the best with the ball in their hands.”

Burks’ 91.3 receiving grade since 2019, as determined by Pro Football Focus, was the highest among active wide receivers in the SEC.

Charles Davis said on the NFL Network his comparison for Burks is both Brown and former South Carolina standout Deebo Samuel.

“Let’s comp him to both because of the physicality,” Davis said. “The reason I went with Deebo is because when you watch Treylon Burks’ tape at Arkansas, he’s in the run game a lot like Deebo. … If you’re an offensive coordinator at Tennessee, Todd Downing, you’re dialing up those kinds of plays even more so than you did for A.J. Brown.”

Burks is coming off one of the best seasons by a wide receiver in school history, with 66 receptions for 1,104 yards and 11 touchdowns.

His receiving yardage ranked third on Arkansas’ single-season chart, behind 1,335 yards in 2012 and Jarius Wright’s 1,117 yards in 2011. He broke the school record for 100-yard games in a season with six and wound up with 10 in his career, second in school history behind the 11 by Anthony Lucas.

Burks’ career numbers were 146 receptions for 2,399 yards and 18 touchdowns. He ranks sixth in school history in both receptions and receiving yardage and is tied for fifth with Cobi Hamilton in career touchdown receptions.

Burks extended the Razorbacks’ streak to 27 consecutive years of having at least one player drafted, dating to 1996.

He is the third Razorback drafted by the Titans and first since offensive guard Sebastian Tretola in 2016. Burks is the first Arkansas receiver drafted since Hamilton was taken by the Cincinnati Bengals in the sixth round in 2013.

The 6-2, 225-pounder earned All-SEC honors each of his three seasons in the league