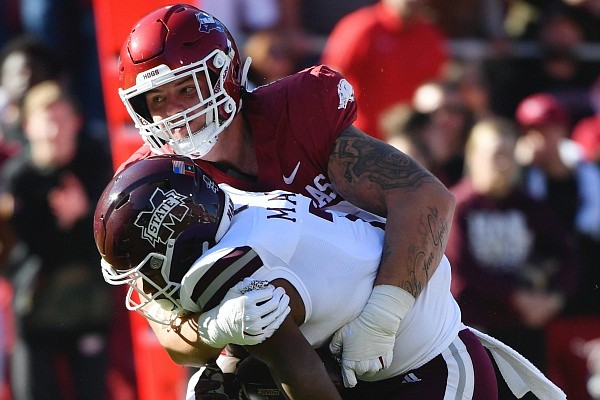 John Ridgeway transferred from Illinois State to Arkansas in 2021 with the hopes of making a name for himself.

He was selected in the fifth round of the NFL Draft on Saturday. The 6-5, 321-pound defensive tackle was taken by the Dallas Cowboys with the No. 178 overall pick.

Ridgeway is the second Razorback selected in this year’s draft, joining Treylon Burks (No. 18 overall, Tennessee Titans). Arkansas has had a defensive lineman drafted each of the last four years and eight since 2015.

According to ESPN, he was the 138th-best available player in the draft and No. 8 defensive tackle.

“Ridgeway is a stout run-defender and former wrestler who controls blockers with his hands, locates the ball well and gets off blocks,” ESPN’s Steve Muench wrote. “His effort chasing the run and rushing the passer is outstanding.

“He doesn't have the foot speed or closing burst to regularly get to the quarterback at the NFL level.”

Ridgeway, who has said he made an eight-hour drive from Bloomington, Ill., to Fayetteville to tour the Arkansas campus prior to committing, made an immediate impact for the Razorbacks last fall. He had an additional year of college eligibility remaining due to the covid-19 pandemic, but Ridgeway opted to make the jump to the NFL.

Pittman openly attempted to convince the tackle to return. He viewed Ridgeway as an ideal fit in his program and spoke highly of his play and character throughout last season.

In December, Pittman commented that Ridgeway was projected to be a fourth- or fifth-round pick.

“If I could go out and get a John Ridgeway every year in the portal, we would take as many as they would give us,” Pittman added. “He’s been a great kid. He works hard. I just think he’s an outstanding guy and had a really good year for us.

“Ridge is more of a two-gapper. He’s going to take guys off the linebackers and things of that nature.”

He finished with 39 tackles, 4 tackles for loss and 2 sacks in 12 games last season. He did not play in the season opener against Rice (appendectomy), but in his first appearance as a Razorback he tallied 6 tackles and 1 sack against Texas.

Ridgeway had 7 tackles at Georgia and 5 in the regular-season finale vs. Missouri, which Arkansas won 34-17, and another sack at LSU.

According to Pro Football Focus, Ridgeway posted the best run-defense grade among the Razorbacks’ interior linemen at 66.6 in 218 snaps. For the season, his defense grade was 64.1.