Montaric Brown drafted by Jaguars in 7th round 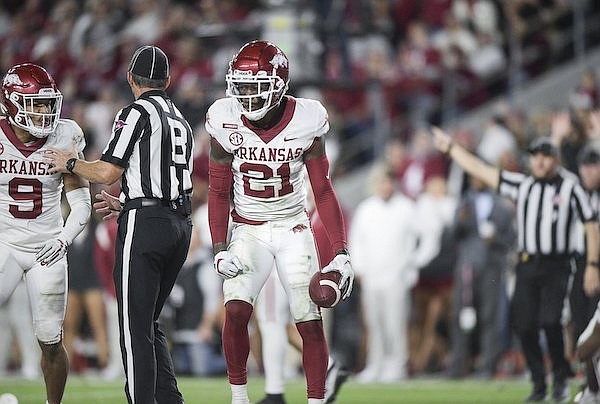 Arkansas cornerback Montaric Brown (21) comes up with a fumble recovery during a game against Alabama on Saturday, Nov. 20, 2021, in Tuscaloosa, Ala.

Montaric Brown seized on his All-SEC season in 2021 and declared for the NFL Draft mere hours after Arkansas’ victory over Penn State in the Outback Bowl on Jan. 1.

A native of Ashdown and 34-game starter in his Razorbacks career, Brown was a seventh-round selection (No. 222 overall) of the Jacksonville Jaguars on Saturday. Brown is the first Arkansas cornerback to be drafted since Tevin Mitchel went No. 182 overall to the Washington Redskins in 2015.

ESPN ranked Brown the 315th-best available player ahead of the draft and No. 41 cornerback.

“(Brown) projects as an instinctive zone corner with good strength but a lack of desired top-end speed,” NFL.com analyst Lance Zierlein wrote. “Brown has a nose for short and intermediate pattern breaks and plays with outstanding body control. He also has soft hands to take the ball away when he's in position.

“He's going to struggle to handle vertical speed and shifty route runners, so a zone-based coverage scheme is more likely to suit him as a pro. He's a willing run supporter whose ball skills and instincts might get him a look at safety if he can carry enough weight.”

Brown led the Razorbacks and tied for the SEC regular-season lead with five interceptions last season. He had seven picks in his Arkansas career, six against conference opponents.

Brown became the first Razorback with five or more interceptions in a season since Tramain Thomas in 2011, and the first Arkansas cornerback to receive first-team All-SEC recognition by the league’s coaches since 2003.

“Just working on my technique every day and trusting the process,” he said Dec. 10. “It was a great feeling having a great season, and everything went as planned."

Zierlein also described Brown as an ambidextrous ball-swatter and “route hound with good pattern recognition” whose weaknesses include a heavy backpedal and below-average burst to close down passing lanes. He was handed a prospect grade of 5.90 out of 8.0.

The figure translates to an “average backup or special-teamer,” according to NFL.com’s scale.