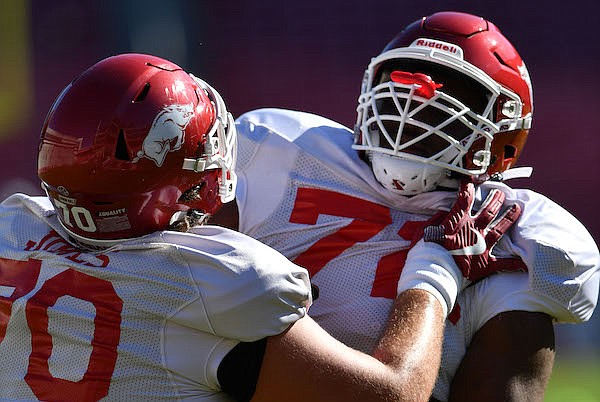 Start naming Razorbacks who helped to a 9-4 record and Cunningham typically doesn’t get mentioned until somewhere down the line.

“You say he was underrated?” Arkansas offensive coordinator Kendal Briles said. “He wasn’t underrated by us.”

Or by KJ Jefferson, the right-handed starting quarterback whose blind side Cunningham protected.

“He limited a lot of the mistakes that we had protecting KJ’s backside last year,” Briles said. “And he did a really nice job in the run game.”

Jones has been a handyman guard/center/tackle lettering twice for Pittman after redshirting with Chad Morris’ 2019 Razorbacks when Division 1 transfers still had to redshirt.

Jones has done fine as a reserve but will be required to step up as starting left tackle.

“I think Luke’s done a good job," Pittman said. “He’s got to work his backside cutoffs. He needs work there. Done a nice job in pass protection.”

Briles painted a similar Jones picture of a player doing well but must be doing better by the Sept. 3 opener against Cincinnati.

“Luke knows it and we’ve told him, physicality has got to be the biggest thing for him,” Briles said. “And he’s done a nice job of that this spring.”

Manuel and Chamblee have size and potential. But rookies don’t start at left tackle unless exceptionally precocious.

Enter Latham, providing he can be spared from offensive guard.

Like Jones, Pittman said Latham has played or at least practiced everywhere on the O-line before established at guard

“That tells you about how smart he is,” Pittman said. “It tells you he’s an athletic guy.”

Briles believes Latham could be a capable tackle but fully knows what he’s done at guard.

“We’d like to be able to keep him at guard,” Briles said. “But he’s athletic enough to get out there and play.”

Ty’Kieast Crawford, 6-5, 347, was supposed to factor last year but arrived out of condition after transferring from North Carolina-Charlotte.

He’s impressed Pittman and Briles backing up senior right tackle Dalton Wagner in the spring, running some first team while Wagner rested an ailing back.

If Wagner’s back is fit, Crawford could forge to the front on the left.

“Ty’Kieast would be the one that could really challenge (Jones) at this point,” Briles said. “But where our needs are, those guys on different sides right now.”