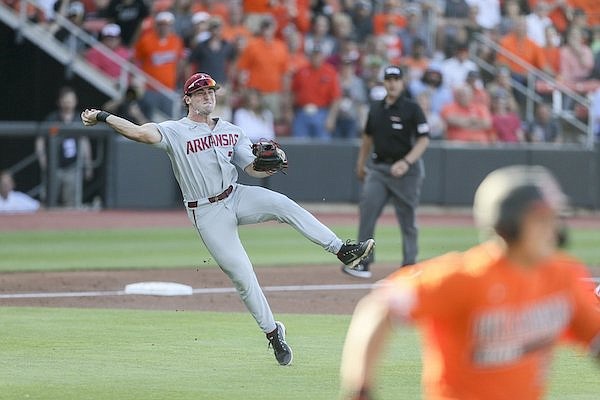 Arkansas third baseman Cayden Wallace (7) throws toward first base during the second inning of an NCAA Tournament game against Oklahoma State on Monday, June 6, 2022, in Stillwater, Okla.

Wallace batted .298 and had an OPS of .940 this year, tied for Arkansas’ team lead with 16 home runs and led the team with 60 RBI, 20 doubles and a .553 slugging percentage. He was the program's highest-drafted sophomore since Andrew Benintendi was drafted seventh overall in 2015.

Phillips was Arkansas' top-rated high school signee. He chose to sign with the Braves while he recovers from Tommy John surgery that caused him to miss most of his senior season at Bourne (Texas) High School, where his fastball touched 100 mph.

Pallette was expected to be Arkansas' No. 1 starter in 2022, but missed the season after undergoing Tommy John surgery during the winter. Baseball America projected Pallette to be a first-round pick prior to the surgery. He had a 4.02 ERA as the Razorbacks' No. 2 starter before he suffered a season-ending elbow injury late in 2021.

Moore was a three-year starter for the Razorbacks after enrolling early when he graduated high school at 17 years old. He won the 2022 Rawlings Gold Glove Award for Division I second baseman, but struggled offensively as a junior with a .232 batting average, .801 OPS, 8 home runs and 44 RBI. He tied for the team lead with 42 walks. The Brewers drafted Moore as a shortstop.

Sprinkle, a shortstop who committed to play baseball at Arkansas as a transfer from UC-Santa Barbara, had been expected to sign professionally since he was selected so early in the draft. Sprinkle had a .285 batting average and .797 OPS, hit 3 home runs and drove in 35 runs this year.

Battles was considered one of the best defenders in the draft and likely improved his stock with a good postseason at the plate. He batted .289 with an OPS of .844 this year, and recorded 15 doubles, 10 home runs and 45 RBI.

Turner transferred from Kent State prior to the season and became one of the Razorbacks' top hitters with a .323 batting average, .890 OPS, 9 home runs, 17 doubles and 53 RBI. He was the most outstanding player of the NCAA Stillwater Regional and was the catcher on the All-NCAA Tournament team.

Vermillion spent six seasons at Arkansas. He pitched mostly as a reliever, but had a run of quality starts early in the 2021 season. He had a 2.39 ERA in 26 1/3 innings this year and, along with pitcher Kole Ramage, became the first Razorback to play on three College World Series teams.

Bosnic, who missed the 2022 season with a flexor strain in his elbow, announced he would transfer to Arkansas from South Carolina prior to the draft. In 2021, Bosnic was 4-2, had a 2.84 ERA and struck out 78 batters in 50 2/3 innings of mostly relief work.

Adamiak, a redshirt sophomore, pitched his final game for the Razorbacks in April and transferred to Missouri following the season. He was 2-0 with a 3.95 ERA in nine appearances this year.

Neville, who attended Basic High School in Las Vegas, was rated the 184th-best prospect in the draft by Baseball America. He announced on the day he was drafted that he would play next season at Arkansas.

Ramage was the Razorbacks’ most-used reliever and finished the season with a 4.80 ERA over 50 2/3 innings and 31 appearances. His 94 career appearances rank second all-time at Arkansas, and he and classmate Zebulon Vermillion became the first Razorbacks to be on three teams that played in the College World Series.

A Wake Forest transfer, Lanzilli led Arkansas with a .326 batting average and .937 OPS, and hit 11 home runs, 9 doubles and recorded 40 RBI in 59 games in his only season with the Razorbacks.