Hogs' RB coach thrilled to be back with Haselwood 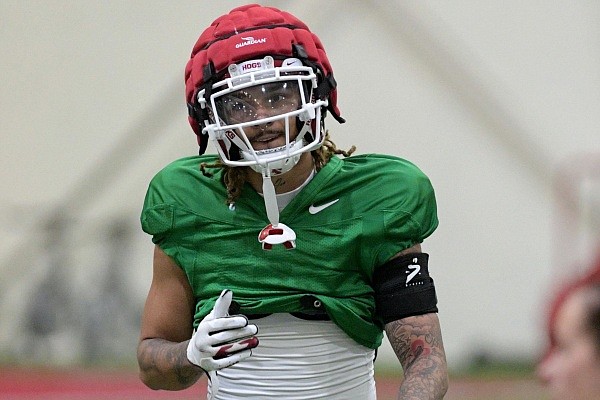 Arkansas receiver Jadon Haselwood, who transferred to the Razorbacks from Oklahoma, is shown during a spring practice on Thursday, April 7, 2022.

FAYETTEVILLE — Jimmy Smith heard Jadon Haselwood’s name come out of a reporter’s mouth Saturday afternoon and a big grin appeared on his face.

It happened instantaneously. The Razorbacks’ third-year running backs coach was more than happy to talk about one of his former players.

Smith was a key reason the Razorbacks secured the commitment of the player likely to lead the team at wide receiver. A transfer from Oklahoma, Haselwood was previously a star for Smith at Cedar Grove High School in Georgia.

“He was kind of like a role model in my life in high school,” Haselwood said of Smith this spring. “He kind of grew me up and made me who I am today. I just came to him for advice (when I was in the transfer portal) and he didn’t even really put that pressure on me to even look toward any other school.”

Years later, they are back on the same sideline.

More from WholeHogSports: Notes and observations from Day 2 of Arkansas' fall camp

“It was a beautiful thing, man,” Smith said. “It’s worked out well. He’s just one of those guys that just fit. The situation that happened there, (it was) the perfect time with us losing the guy we lost in Treylon (Burks). It worked out and I’m just happy he’s here.

Haselwood began training camp on a high note, according to Arkansas coach Sam Pittman on Friday. He said the presumed No. 1 target of quarterback KJ Jefferson this fall may have caught more passes in Friday’s first workout than he did the entire spring and “had a really nice day.”

Arkansas’ third-year head coach believes Haselwood has something to prove this year. He led the Sooners in receptions (39) and touchdown catches (6) in 2021, but Haselwood wants to accomplish much more.

“He’s 100% that he thinks from where he was in high school to what he’s done in college is not acceptable to him,” Pittman said. “And I think he’ll have a really good year. I think he’s got a lot of want-to and a lot of things in his mind that he needs to prove.

“You’ll have to ask him, but that’s how I feel about it.”

Smith said Saturday he is enjoying being around Haselwood on a daily basis again. Holding an understanding of the receiver's makeup, Smith knows what kind of goals Haselwood has and expectations he sets for himself.

“I think that if he continues to work he can reach some of the things he wants to do,” Smith said. “He's a hard worker, man. He came in and put his head down. I like what I see in him, and we've got good guys on this team who are going to hold you accountable and make sure you do what you're supposed to do.

More from WholeHogSports: Sights and sounds from the Razorbacks' second practice of the fall | Jimmy Smith, Rocket Sanders, AJ Green speak with the media

“If you do what you're supposed to do, you'll be a part of the family."

Running back Raheim “Rocket” Sanders is said to be in line for the bulk of the carries this fall with Dominique Johnson recovering from an injury. He is excited by Haselwood’s talent.

The receiver’s production and Sanders’ numbers could go hand in hand.

According to Pro Football Focus, Haselwood’s overall offense grade (62.4) and receiving grade (61.6) in 2021 would have ranked second on the Razorbacks behind Burks. And his run-blocking figure (68.0) would have led the team by a wide margin.

“I actually feel like he came in and attacked (things) fast,” Sanders said. “Not even just (from an) on-the-field standpoint, but in the weight room. I feel like just with him coming in and at the end of workouts, he talks like he’s been here.

“I feel like that plays a big part. I feel like he’s going to have a great year this year, as well.”