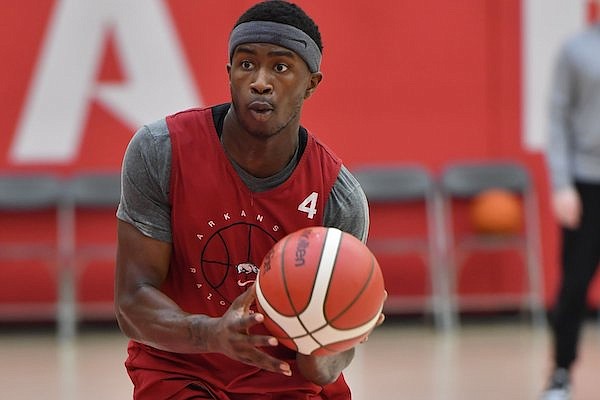 Arkansas guard Davonte Davis drives to the lane Wednesday, July 27, 2022, during practice in the Eddie Sutton Men's Basketball Practice Gym on the university campus in Fayetteville.

FAYETTEVILLE — The shot clock is a little shorter. So is the length of the court.

The lane is wider. Goal-tending is allowed. There is one fewer official.

Those are some of the differences in playing games governed by rules for the International Basketball Federation the Arkansas Razorbacks will experience during their four-game European tour compared to NCAA rules.

University of Arkansas Coach Eric Musselman said the officials — two under FIBA rules rather than three in college games — also might be a little quicker to call technical fouls.

“Yeah, probably more technicals in international games than normal,” Musselman said. “They’re a little stricter on demeanor on the sideline.”

Musselman has plenty of experience working in games with FIBA rules as previously he was coach of the Dominican Republic national team (2010-11), the Venezuela national team (2011-13) in the Global Experience with China (2009) and U.S. (2010) teams.

This will be the third foreign tour for Musselman as a college coach, including games in China when he was an assistant at Arizona State and in Costa Rica as Nevada’s coach.

“I know all the FIBA rules inside and out,” Musselman said. “I might know the rules in FIBA better than I do in college, believe it or not, because I’ve probably coached just as many games under those rules.”

Musselman said he’s not overly concerned about how the Razorbacks adjust to FIBA rules when they play their exhibition games in Spain and Italy, starting with an opener against Valencia Seleccion on Tuesday.

The games Arkansas will play once the regular-season starts, Musselman said, are far more important than their exhibition matchups.

In preparation for the European tour, the Razorbacks have been using FIBA basketballs — which like NCAA balls are 29.5 inches in circumference, but which the players said feel smaller — and practicing with the international game’s 24-second shot clock instead of the 30-second clock in the college game.

Musselman said the shot clock could impact the Razorbacks if they’re forced to out of their set offense.

“Almost all of our sets are 8 to 12 seconds, because they’re NBA, quick-hitting sets that are not 20-second development sets,” he said. “Our sets won’t be affected at all, but what will be affected is when our plays break down, what we get into in our open offense.

“What’s going to happen is, it’s going to be run the play, shot clock is at two seconds, and you’ve got to get something real quick.

“I think it’ll help us execution-wise getting to our spots a little quicker knowing that the shot clock is significantly different. It’ll maybe help our transition game. I think there will be a big adjustment in Game One for our guys to see how quickly that shot clock really is.”

Teams have eight seconds to get the ball past the mid-court line under FIBA rules — two seconds less than college teams are allowed.

“If we have an eight-second call in the backcourt, I’ll probably get mad in the moment,” Musselman said. “But we’ve got to stick to our rules that we have to play with for 30 games that count and really matter.”

The free-throw lane on a FIBA court is 16 feet wide — same as the NBA — while the NCAA lane remains at 12 feet, but Musselman didn’t alter the dimensions in practice.

“Just a few little things you have to get used to with FIBA,” Arkansas freshman forward Jordan Walsh said. “But it’s been a good experience so far.”

Razorbacks freshman guard Anthony Black played six games in June using international rules when he helped Team USA win the gold medal at the FIBA U18 Americas Championship — all the teams had players 18 or younger — in Tijuana, Mexico.

“It was a blessing to get invited and to make the team,” Black said. “Getting to play in Mexico was fun, playing with a different group of people — some a grade younger than me, some my grade.

“Stuff like that you’ll remember for the rest of your life because not a lot of people get to do it.”

Touching the ball while it is in the cylinder of the basket is a goal-tending violation — on offense or defense — in college basketball, but is allowable under FIBA rules.

Arkansas forward Trevon Brazile demonstrated how swatting the ball when it’s in the cylinder isn’t goal-tending in international games in a video posted on Twitter with a nerf ball and toy goal attached to a door.

“We’re not going to go out here and work on tapping the ball off the rim because you’re allowed to do it in FIBA,” Musselman said. “I really don’t want any bad habits.”

Musselman said not to be surprised if the Razorbacks suffer an increase in being called for traveling in their exhibition games.

“I think that the players, the media, my wife — everybody — is going to be shocked at how many travel calls we have early on,” Musselman said. “My experience with American players that have a really good first step, that’s called [traveling] at a high, high frequency.

“So look for a lot of travels early, and then look for some adjustments.”

Musselman smiled when asked if he expects Arkansas’ opponents in Spain and Italy to get favorable calls from the local officials.

“We’re not going to get any good whistles,” Musselman said. “You’ve got to learn to play through whistles anyhow.

“I mean, I think it’ll be good for our guys to be outside of our own element and try to deal with whatever circumstances come our way.”

There are some differences in playing games governed by rules for the International Basketball Federation the Arkansas Razorbacks will experience during their four-game European tour compared to NCAA rules. Some of the changes include:

Arkansas’ exhibition basketball games in Spain and Italy will be available for viewing via a subscription to FloSports, the UA announced. The subscription to watch the four games will be $29.99, according to a news release. Games will be streamed live on FloHoops.com and archived to watch on demand on the website or app. Brett Dolan and Matt Zimmerman will call the games remotely.

Here is a schedule for the games (All times Central):