Notes and observations from Day 3 of Arkansas' fall camp 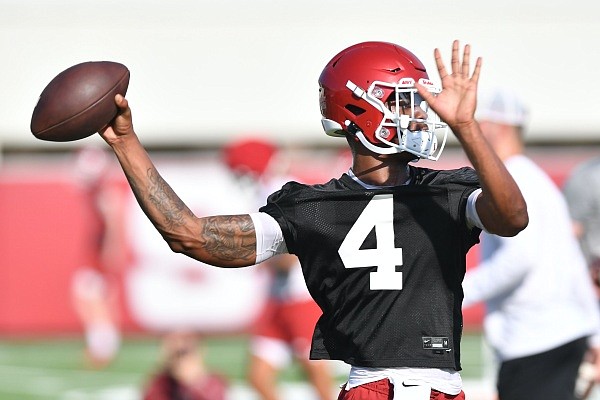 FAYETTEVILLE — Arkansas’ football team went through its third practice of the preseason Sunday afternoon outside Walker Pavilion. Here are some practice notes and observations from the periods open to media members:

• Offensive lineman Marcus Henderson continued to get individual work near the rest of the group during position drills. He was again in a green no-contact top.

Linebacker Drew Sanders, the transfer from Alabama, did not take part in Fastball Start for the third consecutive day. Jackson Woodard took reps with the first-team defense alongside Bumper Pool for the second straight day.

Chris “Pooh” Paul, a promising linebacker who was not active and did not have his helmet during Saturday’s practice, was back in shoulder pads and a helmet Sunday. He did not take part in the Fastball Start.

• The highlights of the workout happened as media members were leaving the practice fields. Arkansas receivers and defensive backs lined up for 1-on-1s.

Jadon Haselwood made a terrific catch with only his right hand in the end zone, bringing in a ball around safety Jalen Catalon. The safety twice gave Haselwood props for the reception before they jogged back toward the line of scrimmage.

Ketron Jackson also beat cornerback Khari Johnson on a deep ball, and Warren Thompson went up and brought down a pass over cornerback Hudson Clark.

Really nice job by Thompson to position himself to make a play in tight coverage then make it. Catching passes on air, I liked the way he anticipated throws, flipped his hips and got upfield post-catch.

• In the Fastball Start: KJ Jefferson threw incomplete for Jackson, found Trey Knox for a short gain then scrambled to his right for a minimal gain. Malik Hornsby hit Jaedon Wilson on a slant for a nice pickup, completed a short pass to Nathan Bax then found Bax again down the right seam for 15-20 yards. His final pass was completed to Quincey McAdoo.

Javion Hunt had the best run among the tailbacks, picking up around 10 yards with the third unit. Cade Fortin found tight end Ty Washington for around 6-8 yards twice.

• Other offensive depth chart notes: Rashod Dubinion got the first-team running back reps in Fastball Start, and Matt Landers slid up with the 1s alongside Jackson and Haselwood. Knox worked at tight end.

AJ Green ran with the second-team offense, and Wilson, Harper Cole and McAdoo were at receiver. Bax was at tight end. Isaiah Sategna and Sam M’bake were at third-team receiver.

• The first-team defense looked the same as Saturday’s second practice. Mani Powell, who spent his senior season of high school at Fayetteville, and Jordan Crook manned the linebacker spots with the second team.

Kaden Henley from Shiloh Christian and Brooks Both were third teamers.