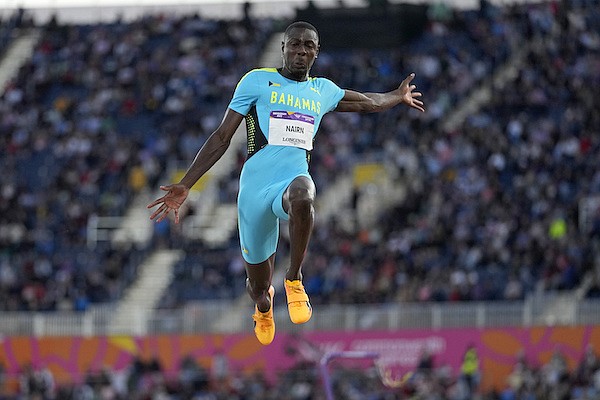 Laquan Nairn of The Bahamas makes an attempt in the Men's long jump final during the athletics competition in the Alexander Stadium at the Commonwealth Games in Birmingham, England, Thursday, Aug. 4, 2022. (AP Photo/Alastair Grant)

FAYETTEVILLE — It was a couple of big back-to-back days for University of Arkansas jumpers past and future.

LaQuan Nairn, a former Razorback who earned All-American honors and scored well at SEC meets, won the long jump at the Commonwealth Games on Thursday in Birmingham, England, with a leap of 26 feet, 61/4 inches while competing for the Bahamas.

More than 5,350 miles southwest of Birmingham in Cali, Colombia, at the World U20 Championships — for athletes 20 and younger — incoming Arkansas freshman Jaydon Hibbert from Jamaica went 56-8 on Friday to win the triple jump.

“I’m proud of both of their efforts,” said Arkansas assistant coach Travis Geopfert, who coaches Nairn and will coach Hibbert. “We’re seeing a former Razorback now have success on the professional scene and then a future Razorback having international success.

“I think it just bodes well for the program on multiple fronts. On the older level and younger level — and every level in between — it’s a huge compliment to the University of Arkansas and our program.”

Nairn, who turned 26 on July 31, consistently jumped 26-4 or better this season and had a career-best 26-113/4 to win at the Mount San Antonio Relays in April at Walnut, Calif.

Going into the world championships in Eugene, Ore., last month, Nairn ranked ninth in the 32-man field, but he failed to make the final after a best jump of 25-71/2 in the qualifying round. His mark ranked 18th.

“It wasn’t like I was just excited to be at the world championships, to be able to go there and participate,” Nairn said. “I went there with the mindset of getting a medal for my country, because I knew I could compete with those guys.

“When I didn’t perform the way I wanted to at the world championships, it was disappointing.”

“He told me, ‘Take out the negative. Leave it at the world championships and go to the Commonwealth Games and handle your business,’ ” Nairn said. “That’s the best advice I ever got from [another athlete].

“My mindset was, ‘Stay hungry, stay confident and compete like you know how.’

“In Eugene, I made a few mistakes — dropped my feet too early on the landing — but it was what it was. I moved on from that.”

Before going to the Commonwealth Games, Nairn informed Geopfert and Matt Clark, the Razorbacks’ strength and conditioning coach, that he would win.

“I told them, ‘I’m not coming back to Fayetteville without the gold,’ ” Nairn said. “So I delivered on that. I’m very happy that I lived up to what I said I was going to do.”

“I’m just ecstatic for him,” Geopfert said. “It was a defining moment. He had a disappointing performance at the worlds obviously, but he knew he was physically ready to compete well.

“I’m super proud of the fact that there were just no excuses — and he’s not an excuse-maker anyway. He was like, ‘I’m going to get this done.’ He put his mind to it and did it. It just opened so many doors for him.”

Nairn said he’ll be back in Fayetteville for a few days, go to the Bahamas for a meet, then compete in several Diamond League meets in Europe.

“I probably can get into any meet right now since I’m the Commonwealth Games champion,” Nairn said. “It’s a huge boost to my career moving forward.

“I was talking to some of my friends who have been on the professional circuit at these meets, and they were like, ‘Man, this is a big deal. This is the Commonwealth Games we’re talking about. It’s like a mini-Olympics.’ ”

Nairn credited competing at Arkansas, continuing to train in Fayetteville and being coached by Geopfert as keys to his success.

“To have Coach Travis as my coach has been a big blessing,” Nairn said. “He’s helped me tremendously. I can talk to him about anything.

Hibbert, 17, was overcome with emotion when he triple-jumped 56-8 — a personal best by 2 feet — on his first attempt at the World U20 Championships.

After landing in the pit and seeing what the jump measured, Hibbert went to his knees, put his head in his hands and cried.

Hibbert’s photo was on the front page of Saturday’s edition of The Gleaner, considered Jamaica’s national newspaper of record that has been published since 1834.

The photo of Hibbert with the Jamaican flag draped over his back and showing his mark on a scoreboard wasn’t on the front of the sports section, but on The Gleaner’s news section front.

“Jaydon had a superstar performance, and in Jamaica they celebrate track and field the way we celebrate football here,” Geopfert said. “So it’s cool to see him get that type of recognition in his country.”

Hibbert also set a World U20 Championships record, surpassing the previous mark of 56-31/4 set by Cuba’s Jordan Diaz Fortun in 2018.

“Right now, I can’t even soak it up,” Hibbert said in an interview after winning the gold medal. “I didn’t see this coming. I’m speechless.

“This was a big surprise because I actually came to the competition with a knee pain and I didn’t even have a proper run up today.

When Nairn gets back to Arkansas this fall and Hibbert arrives on campus, the two gold medalists will train together with Geopfert.