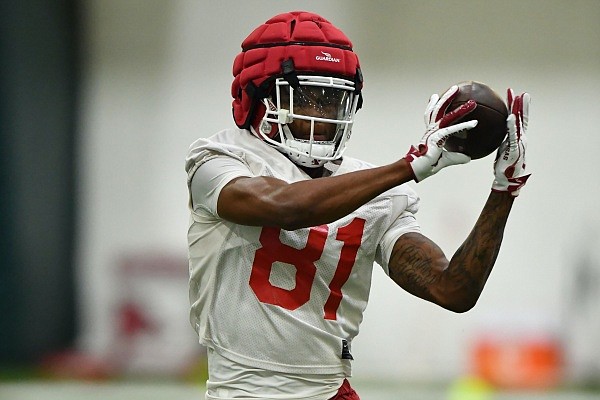 Prior to fall practice, University of Arkansas freshman receiver Quincey McAdoo said he was living the dream of being a Razorback.

“I know it was going to be the life I wanted to live,” McAdoo said of being a Razorback. “It’s quiet in Fayetteville. It’s way bigger than Holly Grove. I’m just loving it right now, I’m not going to lie.”

The ability to choose from numerous restaurants near campus is a treat for McAdoo.

“Back home we didn’t even have a McDonald’s,” he said. “All we had was a Dollar General and some gas places. We have everything on [Martin Luther King Jr. Boulevard].”

McAdoo was a 3-star prospect by three of the four major recruiting services while one rated him a 4-star. He committed to Florida State in January of his junior year but re-opened his recruitment in April.

Since enrolling in January, McAdoo has put on about 30 pounds with help from director of strength and conditioning Jamil Walker and his staff.

“Coach Walker, that’s my guy,” McAdoo said. “I’ve liked Coach Walker ever since I was being recruited. I came in at 171 in the spring and now I’m 200.

“I’ve been crushing the workouts. The team is looking real good right now. Summer workouts have been hard, but we push through.”

His time with Walker has improved his strength and helped his lower body.

“I feel way better even though I had a brace on coming out of my senior year,” he said. “I don’t have a brace and no more knee problems. I feel like I have a new pair of legs.”

Clarendon Coach Mark Courtney saw McAdoo on Aug. 2, the day before the Razorbacks were to report back to Fayetteville for fall practice after a week off. He noticed the differences in McAdoo’s body.

“He looks really good,” Courtney said. “He’s thickened up. He looked like an SEC receiver.”

McAdoo said Walker has been impressed with his freshman class, which ranked an average of 26.25 nationally by the four recruiting services.

“Coach Walker said this is one of the most athletic groups he’s seen while he’s been here; how we came in and got right to it instead of being babied in,” McAdoo said.

McAdoo was a Jack-of-all-trades for the Class 2A Lions. He played running back, receiver and defensive back.

He rushed 82 times for 894 yards and 11 touchdowns, and had 34 receptions for 617 yards and 8 touchdowns as a senior. He also finished with 58 tackles, 2 tackles for loss, 1 interception and an 88-yard fumble return for a score.

Now focusing only on being a receiver, McAdoo said learning the position has been the biggest adjustment for him.

"That’s really where the hard part came in," he said. "I’ve always been an athlete. I feel more confident with my plays.”

Offensive coordinator Kendal Briles’ playbook has also been a test for McAdoo.

“In high school, we had a good 30 plays,” he said. “Up here, it’s like a dictionary. It’s so thick you have to really study it. I’ll be in my playbook more than I study for school.

"That’s not a bad thing, though, because my grades are good.”

Courtney’s son Dax also signed with Arkansas for the 2022 class. He announced Aug. 1 that he was medically retiring after suffering injuries in high school and recently undergoing another surgery.

The elder Courtney said McAdoo can make things happen in the open field.

“Love watching him catch the ball in a little bit of space because he can make a move and he can make you miss, but he’s also strong enough and got enough dog in him. He’s hard to tackle,” Courtney said.