Football just the beginning for Sategna 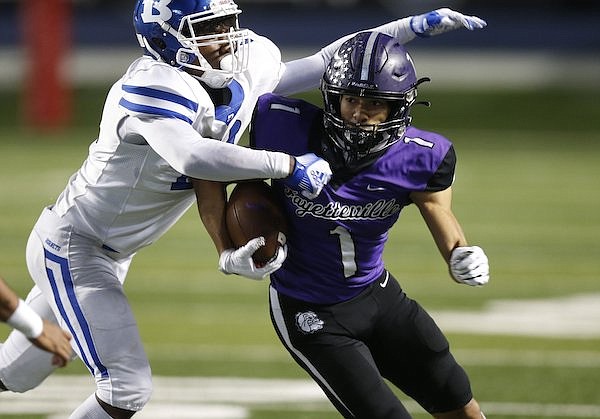 FAYETTEVILLE — Isaiah Sategna is confident he will continue to compete in football and track and field at a high level at the University of Arkansas — and beyond — just as he did at Fayetteville High School.

“My goal is to be in the Olympics and play in the NFL,” Sategna said. “I do feel that’s pretty realistic.”

Sategna, 5-11 and 175 pounds, is a freshman receiver for the Razorbacks and signed his football scholarship with the understanding he also could be on the track and field team.

“Everybody would have had to share him,” said Sam Pittman, going into his third season as Arkansas’ football coach. “Or he just would not have been interested in your school.

“We certainly didn’t have a problem with that. We want him to be great at whatever he’s willing to work for. He does want to do track. He should.

Last season Sategna had 100 catches for 1,908 yards and 17 touchdowns to help Fayetteville reach the Class 7A state championship game, where Bryant beat the Bulldogs 42-38.

Then Sategna stayed in high school in the spring to compete in track rather than enroll early at Arkansas for football. At the Class 6A meet he won the long jump with a state-record leap of 24 feet, 8 inches. He also won the 110-meter hurdles, the 330-meter hurdles and tied for first in the 100 meters to lead Fayetteville to the championship.

Sategna was rated the top football recruit in Arkansas and Gatorade named him the state’s best track and field athlete.

“It’s a challenge just doing one sport, so it’s definitely going to be a challenge doing two sports at Arkansas,” Sategna said. “But other people have done it in the past, so it’s not like it’s impossible.”

Clyde “Smackover” Scott was an All-Southwest Conference and All-American running back and defensive back at Arkansas who won a silver medal in the 110 hurdles at the 1948 Olympics, then played in the NFL.

The skill sets are similar in some ways.

“Whenever I’m in my receiver stance, I’m thinking about coming out of the starting blocks like I’m running a race,” Sategna said. “Just firing out and being explosive, putting force back into the ground.

“Then when I get open and get the ball, it’s like I’m running the 100 meters for the yards after the catch.”

“I think football and track are kind of like brothers,” Bucknam said. “Both sports are about speed and those one-on-one matchups.”

Fayetteville Coach Casey Dick, who played quarterback for the Razorbacks from 2005-08, said Sategna is a mix between former Arkansas receivers Joe Adams and Greg Childs.

“Isaiah has got the physical presence and finishing ability that Greg had along with Joe’s elusiveness and agility,” Dick said. “That’s a really good combination.

“When the ball’s in the air, Isaiah’s unbelievable. I know he’s only 5-11, but when you can long jump more than 24 feet and run the hurdles like he can, there’s a whole lot of explosiveness built up in that body where he can do really special things to make the catch.

“There were countless times during a game where I’d step back and see Isaiah make a play and go, ‘Wow. That’s something you don’t see every day.’ ”

Sategna’s father, Mario, was an NCAA champion decathlete at LSU and his mother, Dahlia, was a sprinter at LSU who competed in the 1992 Olympics for Jamaica.

“I would say I have the best genes in the nation,” Isaiah Sategna said. “My parents definitely were great athletes. I’m just trying to live up to what they did, and hopefully do a little bit more.”

Bucknam said his staff and Pittman’s staff worked well together after Sategna decided to drop his commitment to Oregon last fall and asked to be recruited by Arkansas again.

“We had a lot of cooperation, a lot of communication, between our staffs,” Bucknam said. “We’re fortunate to have a good relationship with the football coaches. It worked out good.

“The primary goal right now is for Isaiah to get on the football field and have a great season. The more success he has in football, the better the chances he’ll be able to compete in more events for us.”

“With all the publicity and everything that he got, I think he was the hardest worker on our team,” Dick said. “He put in a lot of extra time catching balls, and then with all of his track workouts he obviously had to do a lot of extra work.

“He’s a great kid with a great mentality. He’s a guy you love to have on your team.”

Having lived in Austin, Texas, when his father was the Longhorns’ head track and field coach, Sategna said, made the Arkansas-Texas game extra emotional.

“I went to the Texas game — not as a recruit, but as a fan — and sat in the stands,” Sategna said. “Nobody outside of Arkansas was really giving the Razorbacks a chance to beat Texas, but they dominated the game from the first snap.”

Sategna was among the fans who stormed the field after the game.

“I made sure I got on the field,” he said. “It was crazy, but a lot of fun. The atmosphere — not just at the game, but around the city before and afterward — was incredible.

“I remember thinking, ‘I know I’m not even being recruited by Arkansas right now, but this is where I need to be.’ ”

When Sategna attended the Arkansas-Texas A&M game with Fayetteville linebacker Mani Powell — an Arkansas commitment then and a freshman this season — it only increased his desire to play for the Razorbacks.

Sategna said he was reluctant to see if Arkansas still had interest in him because Mario Sategna previously had resigned his assistant coaching position on the track and field staff with the Razorbacks.

“But when I talked it over with my parents, they were happy if I wanted to be at Arkansas,” Sategna said. “So I decided to make the best choice for me.”

Sategna let Dick know that he wanted to open up his recruiting with Arkansas again. Dick set up a call with Pittman, offensive coordinator Kendal Briles and receivers coach Kenny Guiton.

“Coach Pittman was pretty happy when we called,” Sategna said.

Sategna is working as an inside receiver for the Razorbacks.

“I’ve never played inside receiver before, so it’s a little different,” Sategna said before camp opened. “But I’m liking it a lot.

“I like how I match up with outside linebackers and safeties versus matching up with corners. You can have a lot of open field.”

Pittman said earlier in the summer he was impressed by Sategna’s work ethic.

“He doesn’t say much, and he works his butt off,” Pittman said. “We’re going to give him every opportunity to get on the field this year.”

Sategna At a Glance

NOTEWORTHY Consensus 4-star recruit by 247Sports, Rivals and ESPN. … No. 1 player in Arkansas and No. 24 wide receiver in the country according to Rivals. … Had 172 receptions for 3,261 yards and 25 touchdowns during his high school career, including 100 catches or 1,908 yards and 17 touchdowns last season. … Also had 6 carries for 157 yards and 3 touchdowns in his career and averaged 24.2 yards on kickoff returns. … Also will compete in track and field at Arkansas. … Last spring at Fayetteville won the long jump, 110-meter hurdles, 330-meter hurdles and shared the title in the 100 meters at the Class 6A state meet. … Parents are Mario and Dahlia Sategna. … Signed with Arkansas after previous commitments to Texas A&M and Oregon.