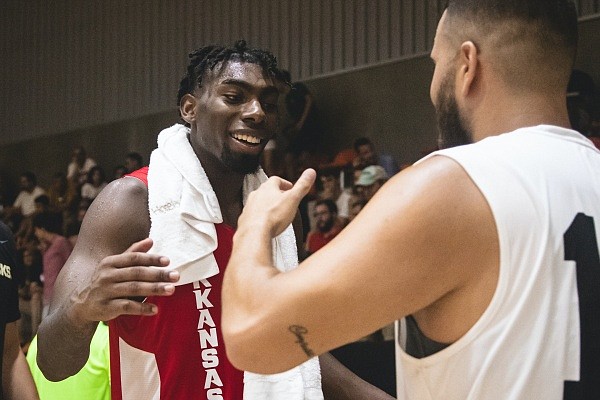 Give the bulk of the credit for that figure to redshirt senior forward Kamani Johnson.

An undersized front-court player at 6-7 who entered the summer in a battle for playing time and a potential place in the rotation, Johnson has been the Razorbacks’ most impressive presence on the backboards through the team’s two games in Spain. He now unofficially has 14 offensive rebounds after recording nine Thursday.

His bully-ball style of play on the interior and scores around the rim aided Arkansas’ 99-86 victory over Catalan Elite in Barcelona. The Razorbacks improved to 2-0 on their foreign tour, which continues Saturday and Monday in Italy.

"I've just been working on my body with (strength and conditioning coach) Dave Richardson this summer. I'm in way better condition,” Johnson said. “I already have a high motor. Now I can just do it for longer. I kind of know myself and know my role.

“I’ve just been working this summer, honestly, and it's showing."

After a 12-point, 8-rebound performance against Valencia Seleccion on Tuesday, Johnson improved his numbers in Game 2. According to statistics compiled by Arkansas’ staff, he finished with 10 points and 12 rebounds in 20 minutes.

"He’s got great toughness. He doesn’t back down from anybody."

Musselman added that at times Johnson's biggest challenge is bringing the same intensity in practices. But there are no concerns when a game begins.

“In a game he does exactly what you want," Musselman said. "He’s a guy that’s really, really unselfish. You can’t teach unselfishness sometimes. He’s all about the team. He’s a great rebounder.

"He’s got a nose for the ball, and you can’t teach toughness, either.”

A 53.5% free-throw shooter last season, Johnson cashed in at the free-throw line after drawing a number of fouls. He was 6 of 6 at the line on top of a 2-of-3 night from the floor.

Johnson has also been one of Arkansas’ top facilitators on the trip. He unofficially had five assists in the first exhibition, and he tallied three more Thursday.

"It's kind of easy for me,” Johnson said of finding teammates with on-target passes. “I’m surrounded by great players. I'm getting rebounds and spitting them out. I kind of have a good eye, too. I don't know if you know, but at UALR, I was passing the ball pretty well, too.

“It's just me learning my game, getting comfortable here and gaining more trust from Coach Muss, too."