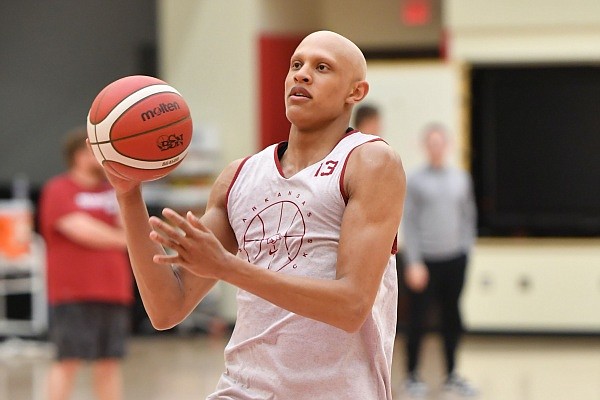 Arkansas wing Jordan Walsh drives into the lane Wednesday, July 27, 2022, during practice in the Eddie Sutton Men's Basketball Practice Gym on the university campus in Fayetteville.

Unlike in Arkansas’ first exhibition on its European tour, the Razorbacks were tested Thursday in Barcelona.

The Razorbacks, who raced away to a 48-point victory on Tuesday, overcame a slow and sloppy start on both ends in exhibition No. 2 to grab a 99-86 win over Catalan Elite, a team comprised of professional players from multiple teams in Spain.

Arkansas trailed 24-20 at the end of one quarter and did not take its first lead until around the midway point in the second quarter. But transfers Ricky Council and Trevon Brazile helped the Razorbacks find their footing and key the turnaround.

"It’s going to be a challenge defensively. Is this team capable of guarding man-to-man? I don’t know. We’ve never played any zone in seven years, but right now simple cuts we lose our man. Great concern for us defensively, for sure."

The Razorbacks outscored Catalan Elite 29-19 in the second quarter.

Brazile, a forward from Missouri, added four points early in the second quarter, and Council, the athletic wing from Wichita State, knocked down a left-wing three-pointer. A Council steal and assist to freshman Barry Dunning tied the game 27-27.

Two of Arkansas’ 5-star freshmen then stole the show for a stretch. After Anthony Black gave up a three on the defensive end, he bounced back with a pair of assists to Jordan Walsh for dunks.

The second Walsh dunk gave the Razorbacks a 41-37 lead. Arkansas took a 49-43 into halftime.

The third quarter belonged to prized freshman Nick Smith, who added 10 of his 17 points. Smith knocked down a pair of threes in that span and closed the period with a layup that beat the buzzer.

Smith, who made three perimeter jumpers in Tuesday’s exhibition on six attempts, hit 3 of 8 attempts Thursday after a scoreless first quarter in which he committed a few uncharacteristic turnovers.

Kamani Johnson, one of the team’s two returning scholarship players, was terrific again on the interior. He scored 10 points to go with 12 rebounds — 9 offensive.

Davonte Davis, the junior guard from Jacksonville, gave Arkansas a second-half boost offensively. He scored the bulk of his 17 points after halftime, including 11 in the fourth quarter.

Davis finished with 3 assists, 1 block and 2 steals, as well.

"First of all, without Devo and Kamani, we don’t win the game, I promise you — probably not even close if those two don’t play," Musselman said. "I mean, the game tilts the other way.

Brazile was consistent throughout with 14 points, Council had 13 points to go with 7 rebounds, Walsh 12 points and 7 rebounds, and Dunning 10 points. Black recorded four points and a team-high four assists.

Brazile was assessed a technical foul in the fourth quarter for taunting an opposing player after adding a layup through contact.

The Razorbacks' early struggles were largely on account of a high volume of turnovers. Arkansas had 23 in the game, including four each by Smith and Brazile.

"We had 23 turnovers, so I talked about our lack of defending people, then we had 23 turnovers and we still scored almost 100 points," Musselman said. "The carelessness with the basketball (is a concern)."

Arkansas' third of four exhibition games in Europe is set for Saturday. The Razorbacks will play Orange 1 Basket Bassano at 12:30 p.m. Central in Como, Italy.

It will be available for streaming with a subscription to FloSports.