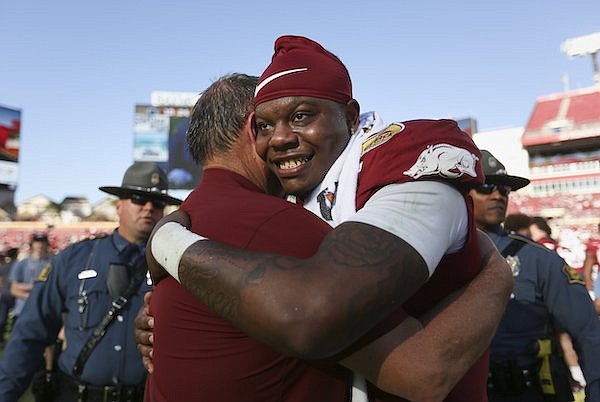 FAYETTEVILLE — University of Arkansas Coach Sam Pittman and the Razorback players have touted a more vocal and confident leader in quarterback KJ Jefferson this year after his breakout sophomore season in 2021.

Pittman was asked Thursday exactly when he felt Jefferson really emerged into a team leader.

“I think probably the second half of the Rice game is when,” Pittman said, referencing last season’s opener.

Jefferson had a shaky first half, which included throwing one of his three regular season interceptions, and Arkansas trailed 17-7 early in the third quarter. Jefferson kicked it in at that point, completing passes covering 31 and 10 yards on the next drive, which ended on his 5-yard touchdown run.

“I mean, he was our leader, but that’s kind of when he took the team over,” Pittman said. “Then you take that and add to the Texas game. That’s whenever he won everybody over. He won the fans, the team, the state, me. I mean, he already had me, but he really had me after that game.”

Pittman touted Jefferson’s intangibles, which endear him to teammates and coaches alike.

“He’s such a likable kid,” he said. “He’s a quarterback that is a running back. He’s got a mentality of physicality about him, a little bit to a fault when he gets in the open field. But it’s hard to take that away from him. I think the team likes him because he’s in the physicality of games.”

The Razorbacks, who worked in shoulder pads and shorts the day before their first scrimmage, changed things up Friday, running their fastball starts in first-team, third-team and second-team order.

The period did not get started until Coach Sam Pittman chewed the team out briefly for not hustling on and off the grass practice field in a timely fashion.

KJ Jefferson went 3 for 3 with the top group, completing passes to Warren Thompson, tight end Trey Knox and Matt Landers during the four-play set. Knox’s pass went down a seam over the right side, and Landers ran a slant pattern and made a good catch on a pass thrown slightly behind him.

Malik Hornsby also went 3 for 3 with the second unit. His first pass was relatively deep down the left side to Isaiah Sategna, and tight end Nathan Bax made a pair of grabs.

Quarterback Cade Fortin had two runs with the third group and he also completed passes to tight end Ty Washington and Chris Harris.

“You’re talking about a kid who is 6-3, 240 pounds, and the nutritionist is telling him he needs more body fat,” Scherer said. “He likes to eat a lot of candy, too.”

Scherer joked about Powell being able to eat candy without adding fat to his body.

Scherer said Powell is at about 6% or 7% body fat.

Powell, who transferred as a senior to Fayetteville High School from Canton, Ohio, played in three games before suffering a season-ending knee injury. He missed spring practice, but has been through all seven of the training camp workouts.

“First off, he’s an awesome kid,” Scherer said. “It’s hard to not say many good things about Mani because of his background and where he came from and all the stuff he’s been through in his life, then extended to the ACL injury, too.

“But Mani has come back this fall and gotten better every single day, and like exponentially better.

“With the strides he’s made in seven practices, I have a lot of confidence that he’s going to be a really good player. And he’s continuing to work to help us out on defense, and he’s going to be a heck of a special teams player this year. He’s one of the strongest kids I’ve ever seen in my life.”

The recruiting territories for linebackers coach Michael Scherer are his native state of Missouri and Dallas.

Scherer was a first-team all-state linebacker at Country Day High School in St. Louis, then played at Missouri from 2012-16.

“I spend a lot of time in the North Dallas area and then all of Missouri,” Scherer said. “I’m from St. Louis, spent a lot of time at Columbia, have a good amount of friends in Kansas City, so you kind of sweep your way across the state, come back down our way.”

Freshman linebacker Jordan Crook has made a good impression on his more experienced teammates at the position.

“He’s just a great example of what you can do when you first get here,” redshirt freshman Chris Paul said. “He reminds me a little bit of myself.

“I came in with a little confidence, as he has. It took me a little longer to learn the concepts and stuff as he did, but he’s been a great addition to the linebacker room.”

“He really comes with that attitude you expect from a linebacker and applies that on the field,” Sanders said.

Sam Pittman was still uncertain Thursday whether the Razorbacks will tackle to the ground in today’s first scrimmage of camp, and if they do how much time would be devoted to it.

“I really haven’t decided what we’re going to do exactly in the scrimmage yet,” Pittman said. “We are doing some tackling, but not against each other. Obviously individual, we’re starting to take our teach period and turn half of that into tackling.

“We’ve got a good football team, I believe we’ve got a pretty good ball club. We don’t quite have the depth that maybe some of the other programs in our conference do. So I’m trying to figure out, we’ll talk about it as a staff tonight and then tomorrow try to figure out exactly what we want to do on Saturday. But we’ve never tackled in practice, except for the young guys, unless it was a scrimmage.”

Pool, whose name was featured on an episode of Jeopardy! a few years ago, was joined on the defense by players like Alabama cornerback Kool-Aid McKinstry, Wyoming linebacker Buck Coors, North Carolina defensive back Storm Duck, South Carolina linebacker Hot Rod Fitten and LSU defensive back Major Burns.