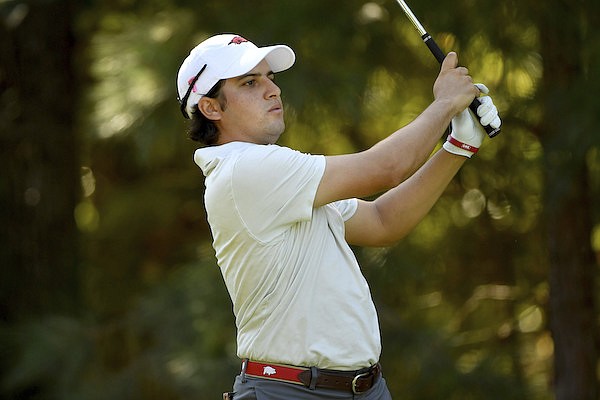 FAYETTEVILLE — Mateo Fernandez de Oliveira needed a little break heading into the 120th Western Amateur after his unblemished run for Team International during its Palmer Cup win in Switzerland in early July.

The 22-year-old University of Arkansas golfer had an extremely successful year with wins in the South America Amateur and the Stephens Cup, a runner-up finish at the Latin America Amateur and a long run with the Razorbacks into the final 15 at the NCAA championships.

The short break suited him fine as Fernandez de Oliveira placed fourth after four rounds of stroke play then powered his way into the championship match before falling 1 up to Austin Greaser at Exmoor Country Club in Highland Park, Ill., on Aug. 6.

“I was feeling pretty good about my game in general,” said Fernandez de Oliveira, who left Saturday for the U.S. Amateur, scheduled to start Monday in Paramus, N.J. “I took a couple of weeks off after the Palmer Cup, which was a great week not only golf wise for me as a player, I think it gave me the confidence I was looking for going into the Western. It was one of the things I most relied on.”

Fernandez de Oliveira, the first Argentinian selected to the Palmer Cup, was the only player on Team International to post a 4-0 record in Geneva, in its 33-27 win.

Confidence, crafty ball striking and tremendous putting carried him throughout the week in Illinois. He fired a 9-under 273 in stroke play to earn the No. 4 seed. In match play he downed Florida’s Yuxin Lin 6 and 4, Vanderbilt’s Cole Sherwood 3 and 1, and Texas’ Travis Vick 2 and 1 to reach the final.

“I putted really well and when you play match play I think putting is almost everything,” Fernandez de Oliveira said. “If you make putts you’re going to keep yourself rolling and you will put yourself up in the match and that’s what I did all week.”

The rising senior for the Razorbacks got early leads in all but one of his matches, including the final, which he led 2 up through 11 holes after sinking four birdie putts.

However, Greaser, a rising senior at North Carolina, rallied with a 35-foot putt on No. 13 to start a streak of four consecutive wins. Fernandez de Oliveira birdied the 17th to pull back within one, but his birdie putt on No. 18 slid past to give Greaser the win.

Fernandez de Oliveira said he usually limits his summer tournaments to four or five, but this year’s schedule called for more, including another event in Europe prior to the Palmer Cup.

“I have a really long stretch going on right now,” he said.

Fernandez de Oliveira is scheduled to tee off at 7:55 a.m. Monday to start play at the U.S. Amateur at The Ridgewood Country Club and Arcola Country Club in Paramus. His Arkansas teammate Wil Gibson of Jonesboro, will tee off at 12:18 p.m., also on the Arcola course. Former Henderson State standout Mitchell Ford of Little Rock is also in the field.

After that, Fernandez de Oliveira will represent Argentina in the World Amateur Championships starting Aug. 31 in France at Le Golf National and Golf de Saint-Nom-La-Breteche near Paris. The Razorbacks open the season Sept. 7 at the Frederica Cup in St. Simons Island, Ga.

“We have big expectations,” Fernandez de Oliveira said. “I think we have a really good team. We have a few guys back.”

“I think we’re a bunch of old players, which can make a really special thing this season,” Fernandez de Oliveira said.