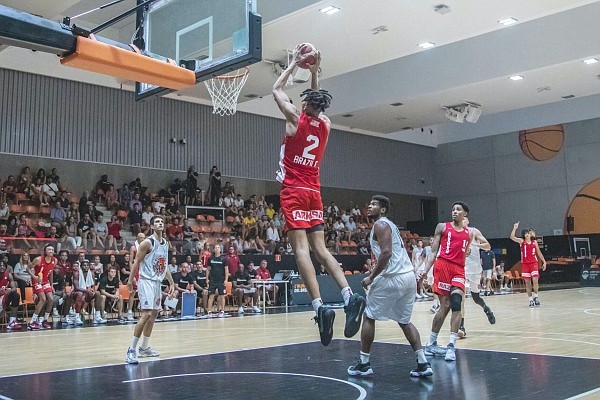 Arkansas forward Trevon Brazile catches a pass for a dunk during the Razorbacks' exhibition against Valencia Seleccion on Aug. 9, 2022, in Valencia, Spain. (Photo courtesy of Rachael Harris, Arkansas Athletics)

Arkansas’ second-leading scorer through three games on its foreign tour in Europe is not in the top three in terms of field goal attempts.

In fact, he’s not even in the top five. Trevon Brazile, the talented 6-10 sophomore forward from Missouri, is No. 6 in shots taken with 19.

But he has by far been the Razorbacks’ most efficient offensive player on the trip. Inside the three-point line, Brazile has made 16 of 18 (89%) shots for Arkansas.

He finished with 9 points on 4 of 4 shooting and 7 rebounds Saturday against Orange 1 Basket Bassano.

“If you look at T.B.’s shooting percentage, I can’t ever remember a guy shooting 5 for 5, 4 for 4 or whatever he did in the middle game,” Razorbacks coach Eric Musselman said. “He has incredible length, incredible athleticism. He was phenomenal in a short amount of minutes.

“I think he played 15 minutes, but he did a phenomenal job rebounding, running the floor and finishing.”

More from WholeHogSports: Black has the magic touch for the Razorbacks

Brazile’s 11.7 points per game in Spain and Italy are second only to Nick Smith Jr.’s 18. The star freshman has scored at least 17 points in all three games.

So far, the forward’s best offensive game came in the Razorbacks’ 99-86 win over Catalan Elite on Aug. 11. He finished with 14 points on 7 of 10 from the floor.

Musselman, though, when asked about Brazile’s performance, was frustrated by his one rebound in 22 minutes in the lineup. He also tied for the team lead with four turnovers.

Brazile responded well to his head coach’s challenge. On Saturday, his seven rebounds were second on the team to Kamani Johnson’s eight, and his four offensive rebounds immediately led to layups.

Brazile accounted for nearly half of Arkansas’ 20 second-chance points.

"T.B., man, he's super talented and super athletic,” Johnson said. “I think T.B. is going to be scary. When we get T.B. ... he's already in the right mind frame, but once he gets comfortable it's going to be a show, for sure."

A 33.3% three-point shooter last season on 1.3 attempts per game, Brazile is an intriguing addition for the Razorbacks because of his ability to stretch the floor. He has not yet gotten to showcase his jumper overseas.

Against Valencia Seleccion in Game 1, Brazile was one of two Razorbacks with three dunks and he added a layup for the team’s first points on a set Musselman has run for Justin Smith and Stanley Umude in previous seasons. Musselman said the forward can change the complexion of Arkansas’ transition game.

“(He is) really active, really moves,” Musselman said. “He’s good at keeping the ball and beating people off the bounce. Obviously he’s a great, great lob threat. And what we (haven’t seen) from T.B. is that he’s a really, really good perimeter shooter, as well.”

Brazile, who is not short on confidence and possesses some edge that led to a technical foul against Catalan Elite after making a layup through contact, was indifferent about his play to begin the tour. Now part of a new program, the standard has been raised.

"It's not really nothing to me because that's what I'm supposed to go out there and do,” Brazile said pointedly. “That's pretty much it. … I definitely feel like I have more confidence both defensively and offensively.

“The coaching staff has a done a good job of putting me in the right places and pushing me just right.”