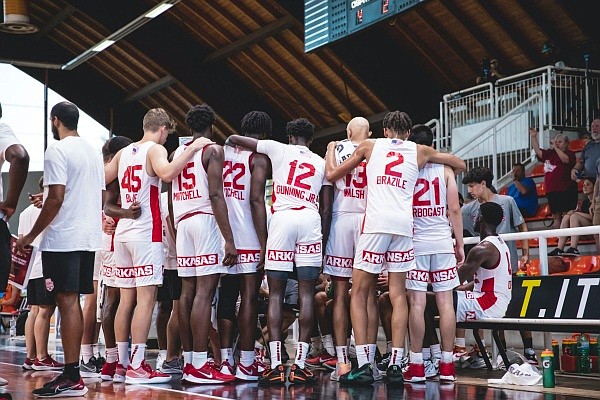 Arkansas players huddle in a timeout during the Razorbacks' exhibition against Orange 1 Basket Bassano in Como, Italy, on Aug. 13, 2022. (Photo courtesy of Rachael Harris, Arkansas Athletics)

Arkansas coach Eric Musselman entered the Razorbacks’ exhibition finale in Italy on Monday expecting his team to face its toughest test of the foreign tour.

His largely new group was more than up for the challenge, especially in the early going. And so was Missouri transfer forward Trevon Brazile.

Brazile led all scorers with 28 points and guided the Razorbacks to a 70-59 victory over the Bakken Bears, a professional team from Denmark. Arkansas concluded its trip with a 4-0 record and average margin of victory of 23.3 points.

The 6-10 forward through the first three exhibitions was second on the team in scoring at 11.7 points on 16 of 18 on two-point attempts. Brazile continued his efficient run by hitting all 12 two-point looks and 13 of 15 overall to go with 9 rebounds and 4 steals.

"I think that led to a lot of my success."

Brazile led all scorers with 19 first-half points on 9 of 9 from the floor. All but one of his field goals came at or around the rim.

He added three rebounds and four steals in the first half as the Razorbacks carried a 41-30 lead into halftime.

Brazile and junior guard Davonte Davis helped Arkansas create separation on the scoreboard in the third quarter after Bakken pulled within nine points on a couple of occasions. Davis had a stretch in which he added a layup driving left, grabbed a defensive rebound then found Makhel Mitchell for a layup then hit a contested runner in the lane to put the Razorbacks ahead by 20.

Aside from Brazile, Arkansas’ first-quarter defense and turnover issues were the stories of the game.

"We've just got to work on it so we can be prepared for the season. That's the biggest part."

The Razorbacks limited Bakken to 5 points on 1 of 13 shooting to begin the game as they raced out to a 20-5 lead. The Bears missed their first 12 shots, including eight threes.

Bakken’s first bucket came with 10 seconds remaining in the quarter, and it turned the ball over 11 times.

"A big emphasis for us was hand in the eye," Brazile said. "In the first three games we didn’t do a good job of hand in the eye. We just tried to incorporate that every time somebody caught the ball – hand in the eye. Everybody was playing defensive intensely.

"The first quarter, that was almost picture-perfect defense all around."

The Bears battled back, though, and pushed Arkansas in the second half. But the Razorbacks responded.

Brazile knocked down a left-wing three then Kamani Johnson added a layup after corralling a loose ball and another layup moments later to extend Arkansas’ lead to 65-46. Johnson again turned in a solid all-around effort and led the Razorbacks’ charge in terms of toughness.

He finished with 8 points and 9 rebounds and came up with 4 steals. Arkansas outscored Bakken by 20 points when he was on the floor.

The Razorbacks committed a tour-high 30 turnovers in the win, a number more than three times higher than Musselman’s team goal for a game. Davis had 7 miscues, Anthony Black 5 and Council 4.

"Offensively there’s two areas of concern," Musselman said. "The turnovers are ridiculous. Words can’t describe how concerned I am about our turnovers. Our three-point shooting has got to improve. I didn’t think it could match last year, but it kind of is.

"So in a short amount of time, meaning September and October, we have some guys that really have to work on taking care of the ball and then we’ve got to improve perimeter shooting."

The Razorbacks came up with 15 steals and forced 27 turnovers, which led to 28 points. Bakken shot 31% for the game.

"We had high, active hands," Musselman said. "We covered their pick-and-roll well. We only talked about four guys from a personnel standpoint. I thought they knew the personnel of each guy.

"(The first quarter was) as good of a 10 minutes that I’ve seen a team play defensively."

Star freshman guard Nick Smith finished with 5 points on 2 of 7 shooting, 2 assists and 1 steal in 12:45 in the lineup. He did not play in the second half after appearing to injure his knee late in the second quarter.

"We think he's going to be fine," Musselman said. "He slipped on the floor. The knee was checked out by the trainer and doctor. First-degree sprain. Could have played. I was not going to jeopardize him at this time of the year to play.

"Probably in a regular-season game we would have let him get loose at halftime and he probably would have played."