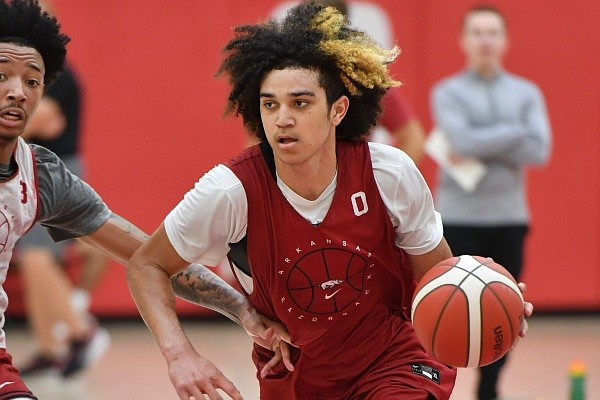 FAYETTEVILLE — Anthony Black has a knack for making everything easier for his University of Arkansas teammates.

That includes getting through airport security.

Arkansas Coach Eric Musselman credited Black, a 6-7 freshman guard, with helping make sure the Razorbacks made their Saturday morning flight from Barcelona, Spain, to Milan, Italy.

“Most of us had trouble checking in,” Musselman said. “Couldn’t get boarding passes, couldn’t get luggage tags.

“Anthony Black somehow figured it out and got eight guys through security much quicker than anybody else on our travel party could do it.

“A.B.’s got the magic touch with everything,” Dunning said.

More from WholeHogSports: Brazile's efficiency a highlight of Hogs' tour

After the Razorbacks arrived in Italy, Black was a key player in their 75-54 victory over Orange 1 Basket Bassano in an exhibition game in Lake Como.

The victory improved Arkansas to 3-0 on its European tour along with victories over Valencia Seleccion 107-59 and Catalan Elite 99-86.

The Razorbacks play their final exhibition game at noon Central today against the Bakken Bears, a top professional team from Denmark, in Lake Como.

Bakken’s roster includes 6-4 guard Skyler Bowlin, who is from Paragould and played at Greene County Tech High School and in college at Missouri Southern. He is the son of former Springdale Har-Ber High School boys basketball coach Scott Bowlin.

“They’re in training camp,” Musselman said of the Bears. “Obviously a professional team, older team. They’ll be way more organized than anybody we’ve played up to this point.

“It’ll be by far our most challenging game, but it’s a good time for us because I’ve gotten [all 13 scholarship players] a start. So that box is checked.

“We’re probably not going to play all 13 guys. We tried that on this trip. Thirteen isn’t going to work. That’s not a magic number for me. I’m positive about that.”

Whatever rotation Musselman decides to use, Black will be a key part of it.

Against Bassano, Black hit the first basket of the game — a three-pointer assisted by freshman guard Nick Smith — and finished with 9 points, 3 rebounds, 3 steals and 1 block in 25 minutes.

“Really, the play was kind of for Nick to decide whether he wanted to get downhill or make the next read,” Black said of his three-pointer. “He was unselfish and passed me the ball, and I made the shot. Shoutout to Nick for the pass.”

For a change Black didn’t have any assists — he had nine in the first two games — but he played tough defense and drove to the basket and finished with three dunks.

In three games on the tour, Black is averaging 7 points, 3 assists, 2.7 rebounds and 2 steals.

“We want him to be an aggressive scorer,” Musselman said. “Obviously innately, he worries, or concerns himself a lot, with being a ball distributor. But there aren’t many guys that want to get in his way when he attacks the rim.

“How many point guards in the country are lob candidates both throwing it and catching it? Not many.

"He’s going to be on the receiving end of a lot of lobs, as well.”

Black was asked if he prefers to throw a lob pass for an assist or be on the receiving end for a dunk.

“I prefer probably throwing a lob because it gets me going and gets my teammates going,” Black said. “It swings a lot of momentum, and I know if one of my teammates catches the lob he’s going to trust me to come down and make the right play next time.”

On Black’s blocked shot, he sent a three-point attempt into the stands.

“I thought he played his best game defensively,” Musselman said. “He should be one of the best shot-blocking guards in the entire country, because he’s got great length. He’s got really great anticipation. He’s got a high, high baseball IQ.

“We’ve got to keep working on him getting lower, because, I mean, there’s just not many [6-7] players that have to guard 5-10 guys. And so when we play quick little guards, that’s asking a lot for somebody his size.

“But if he can just continues to learn about his spacing, and gives a little bit of a cushion and then can use his length to contest, I think he should be one of the best defenders in the entire country.”

Dunning said Black helps stretch the defense to create openings for himself and others.

“A.B. just gets the defense moving and on their toes,” Dunning said. “Dude is like a high flyer and can catch the oops and distribute the oops.

“He makes the game so much smoother, so much easier. Just not him, but all of our teammates. And off the court just a great teammate and great guy to be around.”

Black said the Razorbacks did a good job of handling a long day of travel and basketball.

“This was definitely better energy than Game 2 that we had as a team,” Black said. “We kind of got over the hump with all the travel.

“We had high energy and played really hard.”