Hogs have state-by-state template under Pittman 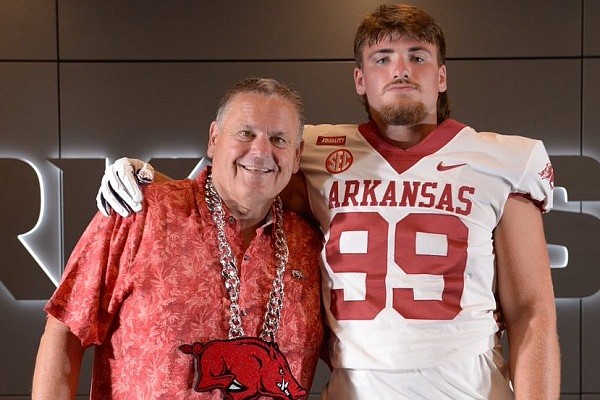 The blueprint for the University of Arkansas football program’s recruiting approach under Coach Sam Pittman looks pretty similar to what the Razorbacks have done the 10 previous recruiting classes before Pittman.

Historically, Arkansas and Texas have supplied most prospects to the program, and that’s the same for Pittman.

He and his staff have signed 19 prospects from the Natural State in the first three classes with three Arkansans committed to the Razorbacks in the 2023 class. From 2010-19, Arkansas averaged 5.6 in-state signees.

If the Razorbacks sign the three current commitments, Arkansas would average 5.5 in-state signees under Pittman for the four classes.

In the 10 years prior to Pittman, former coaches Bobby Petrino, Bret Bielema and Chad Morris signed an average of 3.9 prospects from Texas. If the five Texans in the 2023 class sign with the Razorbacks, it would make 14 Lone Star recruits for Pittman and staff in four years for an average of 3.5 per class.

Florida was the third most popular state for Petrino, Bielema and Morris to recruit in the 10 years prior to Pittman. They signed 25 Floridians for an average of 2.5 prospects per class.

The Razorbacks signed defensive lineman Eric Thomas from Pensacola in Pittman’s first class in 2020 and running back Raheim Sanders from Rockledge in the 2021 class. If running back commitment Isaiah Augustave of Naples signs for the 2023 class, Arkansas would have three Floridians in four classes.

Pittman, along running back coach Jimmy Smith and special teams coordinator Scott Fountain, has strong ties to Georgia, and that has contributed to the state currently being the third-most popular destination for the staff.

The Razorbacks signed 10 from the state in the first three classes and have pledges from quarterback Malachi Singleton and defensive back RJ Johnson along with defensive linemen Stephen Johnson and Ian Geffrard for the 2023 class.

In the previous 10 classes prior to Pittman, Arkansas signed 13 prospects from Georgia.

If the three current commitments from Oklahoma sign with the Razorbacks, Pittman and staff will have 10 Oklahomans in four classes for an average of 2.5 per class, which ranks the state as the fourth-most popular for Pittman and staff. That would best the previous 10 classes' average of 1.4 signees from the state and the fifth-most productive state for Arkansas.

Tennessee has been the fifth-most recruited state for Pittman. The Razorbacks have signed six from the state while having the commitment of offensive lineman Luke Brown for the 2023 class.

Petrino, Bielema and Morris signed five from the Volunteer State in 10 recruiting classes, which placed the state the ninth-most popular destination.

Louisiana produced 21 signees for Arkansas from 2010-19, making it the fourth-most productive for the Razorbacks in that span. The Razorbacks don’t have a commitment from the state for the 2023 class and have signed three since Pittman's arrival as head coach.

The Razorbacks have three current commitments from Alabama and are in the running for highly recruited offensive lineman Vysen Lang. Arkansas signed seven from the state from 2010-19.

Missouri produced seven signees from 2010-19, while Pittman and staff have signed two prospects so far from the Show Me State.