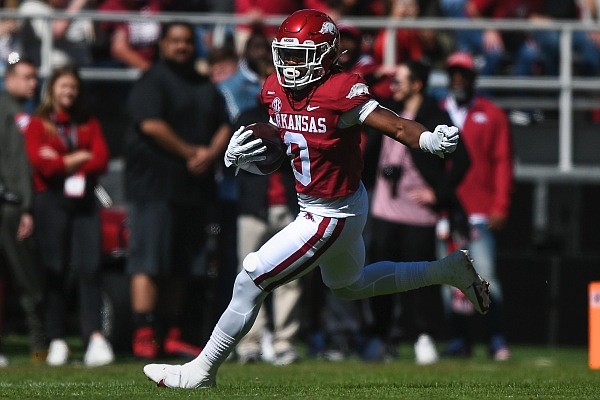 Arkansas running back AJ Green (0) carries the ball, Saturday, October 16, 2021, during the third quarter of a football game at Reynolds Razorback Stadium in Fayetteville.

FAYETTEVILLE — Arkansas special teams coordinator Scott Fountain is hopeful the Razorbacks will show to be much improved in a key area in the game’s third phase.

He envisions fielding units that are sound and clean in terms of protections and penalties. That has been a cause for some concern in previous seasons.

"At kick return, that's an area I think we can be better at this year,” Fountain said Wednesday after the Razorbacks’ 11th practice of the preseason.

The third-year Arkansas coordinator has a number of intriguing options vying for return job, including running backs AJ Green and Rashod Dubinion, freshman receiver Isaiah Sategna and transfer receiver Matt Landers. Green is more versed than the others having brought out a team-high nine kicks a season ago.

More from WholeHogSports: Observations from Day 11 of Arkansas' fall camp

Landers returned one kick at Toledo last season for 26 yards.

At Cedar Grove High School in Georgia last year, Dubinion totaled 205 yards and one touchdown on kickoff return. Sategna, a track star in addition to his play on the football field at Fayetteville, averaged 24.2 yards per return and returned a kickoff for a touchdown as a high school junior.

In 2021, the Razorbacks nearly doubled their kickoff return yardage (311) from the previous season. Green and cornerback LaDarrius Bishop led the charge with 147 and 144 yards, respectively.

Arkansas, though, is in need of a weapon capable of changing games. The Razorbacks have not retuned a kickoff for a touchdown since October 2017 when De’Vion Warren went 100 yards in a lopsided home loss to Auburn.

Arkansas coach Sam Pittman said ahead of fall camp that he liked Bishop’s prospects at kick return and added defensive back Myles Slusher was an option. Running back Raheim "Rocket" Sanders had one return last season, but Pittman isn’t interested in his top back having more on his plate or taking more hits.

“We've just got to have a guy hit it,” Pittman said.

More from WholeHogSports: Fountain, kickers speak to reporters after Day 11

In punt return, the Razorbacks ranked fifth in the SEC last season in yards (264) and fourth in yards per game (20.3).

Oklahoma transfer Jadon Haselwood has received reps at the position, and Bryce Stephens, a speedy receiver, may be the logical choice after showing flashes in victories over Arkansas-Pine Bluff and LSU last season. Haselwood did not return punts for the Sooners.

Receiver Harper Cole, a 5-9 redshirt sophomore, is said to be Nathan Parodi-like in his dependability, and Sategna is in the mix, too. A determination on top options in the return game is expected to be made in the next week, Fountain said.

“We try to put them in a lot of traffic drills and see if they're going to drop the ball,” Fountain said when asked about infrequent live action on special teams in fall camp. “When we scrimmage on Saturday, it's fastball, full-field cover, but we're not tackling a lot in that. We're getting people in their face and seeing how they handle it.

“That's the big thing, dependability. …  It’s a tight competition. It’s so important to me for us to be a good punt return team."