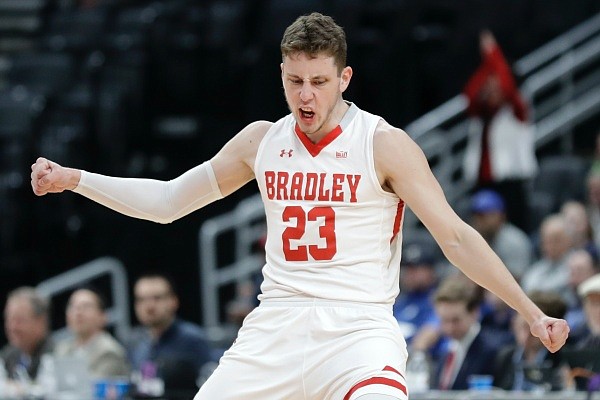 Bradley's Ville Tahvanainen celebrates after making a 3-point basket during the second half of an NCAA college basketball game against Valparaiso in the championship of the Missouri Valley Conference men's tournament Sunday, March 8, 2020, in St. Louis. (AP Photo/Jeff Roberson)

FAYETTEVILLE — The upcoming non-conference schedule for Arkansas' men's basketball team will include a December game in North Little Rock.

The Razorbacks are set to play Bradley on Saturday, Dec. 17 at Simmons Bank Arena, according to the Braves' schedule that was released Wednesday. Bradley's official website indicates the game will tip off at 3 p.m.

The Razorbacks have never played the Braves, whose campus is located in Peoria, Ill. Bradley finished last season 17-14 overall and 11-7 in Missouri Valley Conference play.

The Braves are entering their eighth season under coach Brian Wardle, who has led the program to more than 20 victories three times since 2017-18.

Bradley returns four of its top five scorers from a season ago, including 6-9 forward Rienk Mast, who averaged 11.6 points and 8.4 rebounds in 2021-22. He started all 31 games and blocked 29 shots.

Dating to 2015, Arkansas is 4-2 in games played in North Little Rock. The Razorbacks lost 89-81 to Hofstra last December.

There are now nine known opponents and 11 known dates on Arkansas' non-conference schedule for the 2022-23 season. The Razorbacks are set to begin the season against North Dakota State on Nov. 7 and will host Fordham on Nov. 11 prior to playing three games at the Maui Invitational.

Arkansas will open the Maui event against Louisville on Nov. 21, will play Texas Tech or Creighton the following day and play its final game there Nov. 23.

The Razorbacks are scheduled to host San Jose State on Dec. 3; North Carolina-Greensboro on Dec. 6; and North Carolina-Asheville on Dec. 21. They will travel to Tulsa on Dec. 10 to meet Oklahoma in the newly rebranded Crimson & Cardinal Classic, and close non-conference play at Baylor on Jan. 28 as part of the Big 12/SEC Challenge.