Notes and observations from Day 11 of Arkansas' fall camp 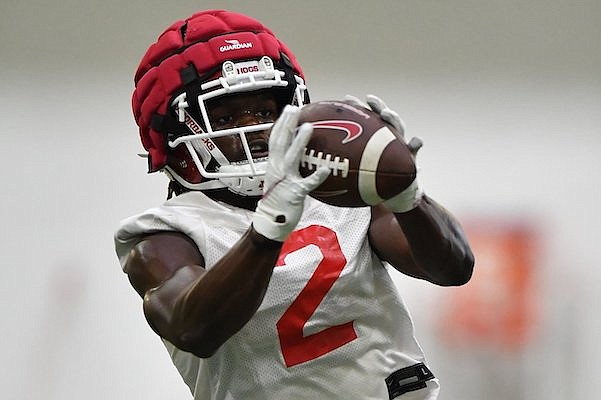 FAYETTEVILLE — Arkansas’ football team went through its 11th preseason practice on Wednesday. Because of rain, the Razorbacks worked out inside Walker Pavilion.

Here are a few notes and observations from the open viewing periods:

• After a period of individual drills, Arkansas held its Fastball Start segment. There were a couple of highlights, one from each side of the ball.

On the final snap of the first-team offense’s rack of plays, KJ Jefferson hit Ketron Jackson on a deep ball. In a game it would have gone down as a 60-plus yard touchdown pass. Jackson, who is among the Razorbacks’ top four receivers, beat Myles Slusher on the play.

A few plays later, with the second team offense and defense on the field, Malik Hornsby dropped back to pass and was intercepted by Georgia transfer safety Latavious Brini. He made a terrific break on a ball thrown a bit to the right of the right seam.

Almost immediately after making the pick, Brini dropped the football and got back into position for the next play. I believe he is going to be tough to keep off the field this fall.

• Marcus Henderson continued to go through practice in a green no-contact jersey. He is still working his way back from a pectoral injury and getting individual attention to the side of offensive line position drills.

• Former Arkansas defensive lineman Robert Thomas was at practice today. He went undrafted out of college, but he spent time with seven NFL teams from 2014-19.

• Linebacker Drew Sanders, who went through the Fastball Start on Wednesday, spent some time with the Razorbacks’ defensive ends. Arkansas defensive line coach Deke Adams said Tuesday that Sanders has “worked a little bit, but not a whole lot” with his group in camp.

• Again watched Arkansas’ receivers closely. They went through a drill in which they ran back-to-back up-and-in routes then had a pass thrown to them by position coach Kenny Guiton. He was firing passes to the guys, and there weren’t too many drops. Guiton later threw fade balls to each receiver.

• The Razorbacks' kickers and punters worked outside in the rain. Scott Fountain said he was glad they got to do that and learn how to operate in bad weather.

Note: Bumper Pool was present at practice, but did not participate in the Fastball Start period.

Note: Jadon Haselwood and Matt Landers were present at practice, but did not participate in the Fastball Start period.