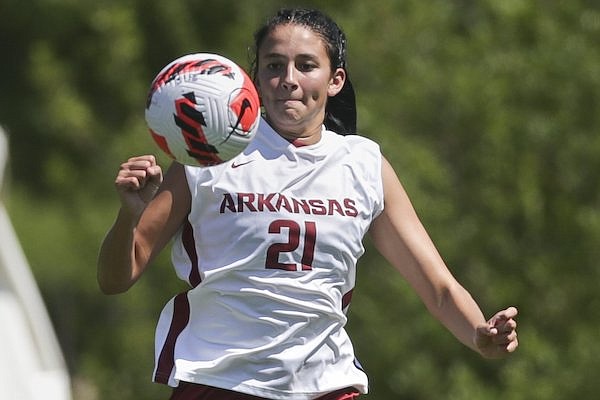 Arkansas forward Ava Tankersley advances the ball during a game against Stephen F. Austin on Monday, Sept. 6, 2021, in Fayetteville.

When Colby Hale first took over as coach of the University of Arkansas women’s soccer team in December 2011, the Razorbacks had never reached the postseason.

Now in his 11th season, he steers the ship of a program that has won three straight SEC regular season titles. He’s taken Arkansas to eight NCAA Tournaments and last year to the school’s first ever Elite Eight appearance.

With a 130-69-19 record with the Razorbacks, he is Arkansas’ career wins leader.

“I think the atmosphere is just super great there [at Razorback Field],” Arkansas junior forward Ava Tankersley said. “We don’t have a state team, so we’re like the pros of Arkansas. It’s hard to beat us there just because it’s like a 12th man on the field for us always.”

To put into perspective the turnaround under Hale, despite the program’s 64% winning record with him at the helm, it still has an overall losing record (316-330-50). His success earned him a pay raise and contract extension in the offseason.

The Razorbacks are looking to exceed the 2021 success, despite losing five starters, including Parker Goins, who finished her career with the second-most career goals (40) at Arkansas. The team also lost three players who had the most starts in program history: Taylor Malham (106), Kayla McKeon and Haley VanFossen (104 apiece).

The team returns its top scorer, senior forward Anna Podojil, who netted an SEC-leading 16 goals and 38 points in 2021. She was on the United Soccer Coaches’ All-American first team last season, and the organization listed her on its preseason NCAA Division I players to watch list for forwards.

Hale and the No. 8 Razorbacks have been nearly unbeatable on their home Razorback Field, boasting a 32-3-2 home record since 2018. The team will get its first chance to play on its home pitch at 4 p.m. on Sunday against DePaul.

For Tankersley, a season-opening trip to play Saint Louis University today will be a homecoming. She is from St. Peters, Mo., roughly 32 miles from the Billikens’ Hermann Stadium. She played club soccer for St. Louis Scott Gallagher ECNL.

One of the Razorbacks’ three home losses since 2018 came against Saint Louis in February 2021, something the team hopes to avenge.

“I’m super excited,” Tankersley said about playing near home. “It’s going to be kind of like a rematch because we played them my freshman year and we lost at home. So hopefully we can come out and get a win at their place in front of my hometown friends and family.”

Senior Reagan Swindall is a returner who played an integral role on last year’s success. She scored a late goal in the Elite Eight matchup against Rutgers, which allowed the game to go into overtime.

She said the team isn’t afraid of anyone they match up against, a trait stemming from the coaching staff.

“When we get to the tournament at the end of the year, people are talking about the matchups,” Swindall said. “Talking about who they want to play, I want Arkansas to be the team that they are like, ‘I do not want to play them.’”

The team is not lacking confidence this year.

“Our goals and our standards are so much higher now than that team was the first year I was here,” Swindall said. “Not saying we didn’t have high standards, but now we know we’re capable of so much. I think the ceiling, there is no limits for this team. Together we can do so much.”

No. 8 Arkansas at Saint Louis

WHERE Hermann Stadium in St. Louis

NOTABLE Arkansas defeated Kansas 6-0 in an exhibition game on Aug. 10 in Lawrence, Kan....SEC coaches picked the Razorbacks to finish second to Tennessee in this year's preseason poll. Arkansas has won outright or shared three consecutive SEC regular-season championships....Arkansas forward Anna Podojil begins the season 21 points shy of tying Parker Goins' school record for career points (118)....Saint Louis defeated Arkansas 3-1 on Feb. 28, 2021, in Fayetteville. The game was played as part of an abnormal college soccer season that included regular-season games in the fall and the national postseason tournament in the spring....Saint Louis won exhibition games over Lindenwood (9-0) and Evansville (4-0) last week....Saint Louis went 13-9-1 and won the Atlantic 10 Conference Tournament last year. The Billikens defeated Ole Miss 2-1 in the first round of the NCAA Tournament before a season-ending 4-0 loss to Rutgers.